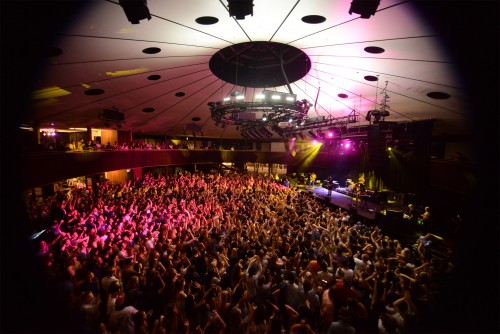 Behind the scenes of the refurbishment of the recently reopened Roundhouse venue on the University of New South Wales (UNSW) Kensington campus, The P.A. People have shared their experience of their role in its transformation.

Opened in 1961, the Roundhouse is a multifunction venue that has featured musical acts, conferences, theatre performances and private parties for over 50 years. The 2200-capacity venue has recently undergone an extensive refurbishment to ensure a spectacular experience for patrons into the future.

Having had a range of ad-hoc technological improvements undertaken since the 1960s, Shelley Valentine, Director, Student Services for the ARC@UNSW explained the need for its substantial transformation, advising “we needed to create an AV/PA solution that would cater for our current variety of uses, but could also future-proof our capacity over the medium term.”

The previous space was dominated by a large central ceiling structure, which limited extra rigging and lighting with the ‘new’ Roundhouse brief calling for enhanced rigging and anchor points that could facilitate a broader production capability.

The old building also presented some significant acoustic issues - with a round venue format and the central ‘dome’ structure.

As Valentine advises “this is a venue that needs the flexibility to accommodate a wide variety of uses - from guest lectures and conferences, to creative-arts productions to band performances (so) we needed to create an AV/PA solution that would cater for this current variety and could also future-proof our capacity over the medium-term.”

The outcome is a venue able to host major international acts, conference clients and in-house entertainment productions and forums.

The ease of use is a big plus - where multiple users with varying system knowledge can access the equipment functionality.

“The venue is getting positive feedback from acts and potential clients; with one saying ‘this is one of the best sounding venues of this size in the country’.”

Sydney’s The P.A. People Installed Systems team, delivered the audio, lighting, projection and control systems, working in conjunction with other suppliers. This project was delivered under two contracts of work; one for the builder and one for the University. 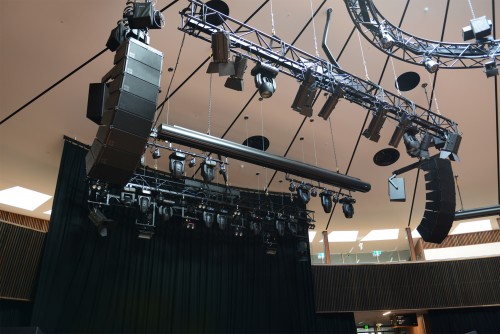 The P.A. People provided comprehensive cabling infrastructure, along with a complement of dimmers, projection screens and luminaires.

Jands assisted The P.A. People with chain hoists for speaker rigging plus winches and chain hoists for motorised lighting bars, trusses and scenery battens as well as a package of curtaining for the venue.

A major challenge with the project was the Barrisol ceiling which is constructed with a lightweight fabric membrane stretched across a segmented pie structure. The stretched membrane needed to be cut to allow the rigging and cabling to pass through. This had to be measured and cut precisely the first time to avoid damage to the ceiling structure.