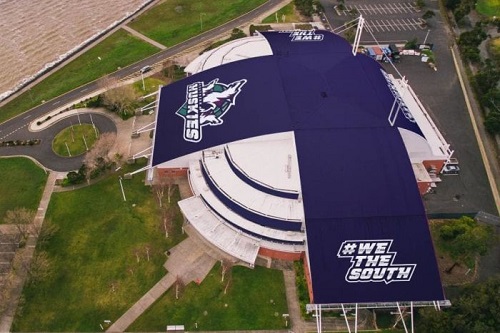 Looking to purchase the Derwent Entertainment Centre (DEC) as part of their bid to join the National Basketball League, proponents of the Southern Huskies NBL consortium are unhappy at Glenorchy City Council's valuation of the venue.

Monday night saw the Council vote unanimously to sell the arena after receiving an unsolicited bid from entrepreneur and Southern Huskies bid leader Justin Hickey to buy the complex earlier this year.

However, as the ABC reports, Hickey believes the arena is worth nowhere near the $18.6 million figure the Council has had it valued at.

Hickey told the ABC “they've gone down the path of engaging people to do an evaluation and they've come up with a figure that is astronomically extraordinary.”

Glenorchy Mayor Kristy Johnson said the valuation was required for accounting purposes, and did not necessarily reflect the market value of the site, advising “the $18 million figure is the figure we have on our books for depreciation purposes.

"That doesn't mean that's what the property is worth on the open market, or what the Council might achieve through the sale of it."

A commercial valuation has also been conducted, but Mayor Johnson would not reveal what that number was, and insisted the Council would not be rushed into a sale.

Mayor Johnson added “we're still getting information about the valuation of the Derwent Entertainment Centre to ensure that we have all the figures in front of us, and all the information and factors to determine what does best value for the community actually mean.

"We're mindful that the consortium has a timeframe they'd like to meet, but I make the point that this is not a fire sale."

If successful in purchasing the centre, Hickey plans to house an NBL basketball team there, and pour $90 million into developing the site.

He said he had only had minimal correspondence from the Council since making the offer earlier this year, advising “the last correspondence was me asking the Mayor if she could provide a copy of the valuation they got and she hasn't been forthcoming with that.

"We're just asking for information that is prudent when we're looking to buy something as big as the DEC.

"We'd like to buy the place but time is running out.”

The Council could move forward with a sale of the DEC or decide to lease the venue.

If the Southern Huskies are granted an NBL licence, it is likely the team wouldn't enter the league until the 2021/22 season.

Opened in 1989, the DEC is the largest indoor arena in Tasmania and is the primary venue in Hobart for large indoor functions and events.

Located on River Derwent waterfront, the venue can hold up to 7,500 people for events such as concerts with a seating capacity of 5,400.