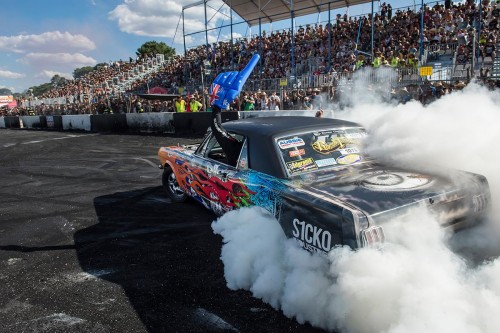 Organisers of Canberra’s Summernats national car festival will begin an overall review of the event today, with this year's festival having been soured when a man was killed after he fell the back of a ute tray.

A record 119,000 people attended the four-day festival, which wrapped up on Sunday.

More than 2,500 cars also entered the competitions at the festival  - 600 more than the previous record.

However, this year's event was marred by controversy after Queenslander Luke Newsome, aged 30, died of injuries he suffered when he fell off the back a ute he was riding on Thursday.

It was the first death at the festival in its 30-year history.

Police are investigating the man's death and Summernats organisers said they would work closely with them.

Summernats organiser Andy Lopez said the team would begin a review into this year's event today.

Lopez told the ABC “what the Summernats does after every single event is we sit down, review what's happened go through the things that went well and the things that could have gone better.

"And then we set our plan forward to improve, enhance and get better for Summernats 31."

Following the man's death, organisers enforced a ban on the Summernats past-time of riding in the back of utes on the cruise route.

When asked if this ban would be extended to future festivals, Lopez said that discussion would be had once the Police investigation was complete.

Despite riding in utes being common place throughout the event's history, it is technically illegal.

Police have said that ACT road rules still apply within the Exhibition Park showgrounds, with the exception of unregistered vehicles and burnouts.