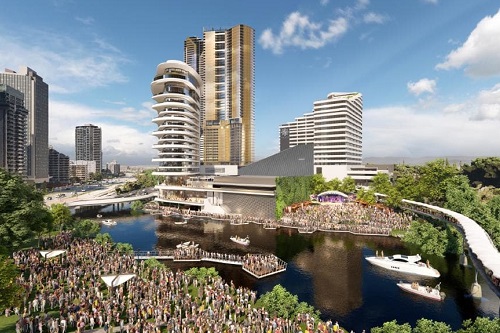 The Star Entertainment Group has unveiled plans for an open-air concert venue across the road from its hotel and casino at Broadbeach on the Gold Coast.

The proposal outlines plans to develop an area that is currently vacant canal-front land on the corner of the Gold Coast Highway and T E Peters Drive.

The one hectare Gold Coast Bulletin Centenary Park, which recently received a $1 million makeover in the lead up to the Commonwealth Games, will now be further activated to accommodate a stage and up to 1,500 people.

If approved, the venue would be able to host events from full-scale concerts and family-friendly such as community carols.

The new venue was conceived by Star Entertainment Group Chief Executive Matt Bekier who explained “we have spoken to a lot of people well-connected to the music industry (and) an outdoor venue that can stage concerts of small and large scale would drive great cut-through and further enhance the Gold Coast as a music destination.

“Our plans include curating a calendar of events from full-scale concerts by world-class bands and performers to family-friendly picnic events like Carols at Christmas to smaller more intimate offerings like string quartets.”

“The elevated stage will be in full view of Gold Coast Bulletin Centenary Park. The park could be activated for larger concerts and free family-friendly events, increasing the audience considerably and creating that unique waterside experience.” 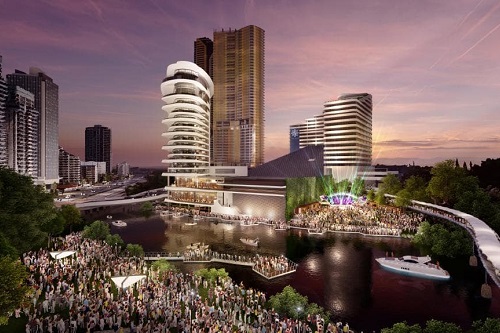 Star have said they will now approach a range of stakeholders including the City of Gold Coast Council, Broadbeach Alliance and entertainment specialists to consider the best way forward for the open-air concert venue.

Bekier added “we want this to be an asset the local community will embrace as part of the fabric of the city.”

The venue concept comes two months after the entertainment group was granted approval for its $2 billion plus masterplan which includes a $850 million redevelopment of The Star Gold Coast and development of the new Dorsett hotel tower.

Star hopes to start construction on the outdoor venue in March, with the first acts scheduled later this year, subject to obtaining the necessary consents.

Images show concepts for the new venue. Courtesy of the Star Entertainment Group.