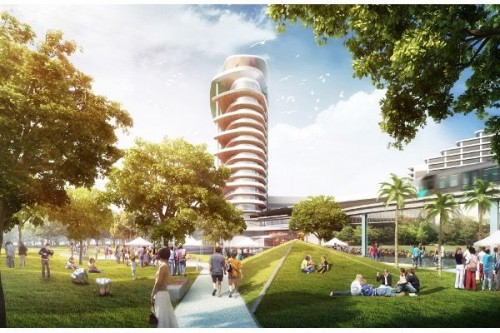 Jupiters Gold Coast and the City of Gold Coast are to combine to revitalise Centenary Park, an underutilised space on the corner of the Gold Coast Highway and T E Peters Drive, in Broadbeach.

Aiming to deliver a canal-front area of parkland for the Broadbeach community, beautification works on the underutilised space will feature introduce new lawns, a geometric feature grassed mound, seating, pathways, recreational area and a space that could be used as a community stage for events.

“It will bring to life an area that has been underutilised for many years, by repurposing the space to provide the ability to accommodate community markets and entertainment.”

Thanking Jupiters Gold Coast its investment in the project, Councillor Taylor stated “Jupiters will work with us to design the park and help deliver our Broadbeach Master Plan vision by providing improved connectivity for locals and tourists alike.

“This is about driving a terrific community outcome at no cost to ratepayers and one that will provide a beautiful new space to support activities happening in Broadbeach now and into the future.

“This land is very prominent and this work will help to reinvigorate the entrance to the Broadbeach precinct.”

Star Entertainment Group Managing Director Queensland, Geoff Hogg  said Jupiters was delighted to have the opportunity to give back to the Broadbeach community.

Hogg explained “last year Jupiters celebrated its 30th year as a member of this community, and we’re excited about the chance to create something here that will become a popular space to be enjoyed by future generations.

“We also became the first partner announced for the Gold Coast 2018 Commonwealth Games, so to be able to create a new event and gathering space in time for this historic event, in what will be a real epicentre for the games, is something we look forward to doing.”

Work on the project will start in December 2017 and be completed in time for the Gold Coast 2018 Commonwealth Games, prior to which Jupiters will pay the Council to rent the park and use the area for construction purposes as the entertainment facility builds a new six-star, all-suite luxury hotel tower as part of its $345 million property transformation.

Hogg continued “we’re grateful to have council’s support for us to rent this land during construction over the next 18 months.”

While the park is rented for construction use, the land will be fenced off to house equipment and a site office for the new hotel tower build on Jupiters Island.

Significant trees will be retained and preserved in the park, including the prominent Moreton Bay figs along T E Peters Drive and various species within the parkland.

While some trees will need to be removed ahead of construction use, Jupiters has committed to replacing them with mature trees, including palm trees, as part of the beautification works to the site next year.

Hogg concluded “using the park during construction will help to minimise traffic impacts for canal residents and remove many logistics issues to ensure we will meet our timeline for these works to be completed ahead of the Gold Coast 2018 Commonwealth Games.”