Elton John to open Perth Arena ‘under the stars’ 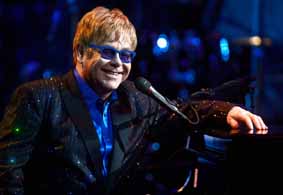 Sir Elton John and his band will now be the opening act of the new Perth Arena on Saturday 10th November 2012.

This follows confirmation today that George Michael has cancelled the entire Australian leg of his 'Symphonica' world tour due to health concerns.

Perth Arena operator, AEG Ogden held discussions with the Arena's Owner VenuesWest and promoter Chugg Entertainment to determine if Sir Elton John would be able to perform a second concert two nights earlier than his sold out show on Monday 12th November.

AEG Ogden Executive Director, Rod Pilbeam confirmed that Chugg Entertainment had advised the international superstar artist was able to rearrange his touring schedule to allow him to arrive in Australian two days earlier and have the honour of opening the Arena, which will be held under the stars, with the Arena's roof to be open for the spectacular opening night.

Pilbeam explained "we were disappointed to learn that George Michael was unable to open Perth Arena, but I'm sure that Western Australian music fans will be delighted that such an international legend as Sir Elton will now have that honour, and will perform twice in the Arena's opening week.

"We are extremely grateful to Chugg Entertainment for their efforts in making this happen and to Sir Elton and his management for being prepared to rearrange their plans. It is a fantastic outcome at such short notice."

All patrons holding a ticket to the George Michael concert will be given the opportunity to use that ticket to attend the Elton John opening night concert or receive a refund. Ticketek will write to all ticket holders explaining the process.

Sir Elton John is excited to be the opening act of Perth's new home of entertainment, adding "my dear friend George Michael has been giving some amazing performances on the Symphonica tour, and I'm very sorry that he can't play the Perth concert. But I'm more than happy to step in for him and play the opening night at the brand new Perth Arena.

"It is a fabulous building and I'm told we can even have the roof open for our concert and play under the stars! My band and I will make absolutely sure that Perth Arena has an unforgettable opening night, and we are looking forward to seeing the city come out in force to celebrate this stunning new building."

Promoter Michael Chugg is delighted that he was able arrange for Sir Elton to step into the breach to open Perth Arena, stating "we are thrilled to add one more show to Sir Elton's November tour and for this to be the official opening of the new Perth Arena. As one of the greatest entertainers in the music business, this will be an incredible show for the people of Perth and a very special milestone for Sir Elton."

In addition to the two Elton John concerts, Perth Arena's opening week will feature concerts from two other international superstar acts Matchbox Twenty (with INXS) and Nickelback, plus the first National Basketball League home game of the Perth Wildcats (against the Adelaide 36ers).

For more information go to www.pertharena.com.au