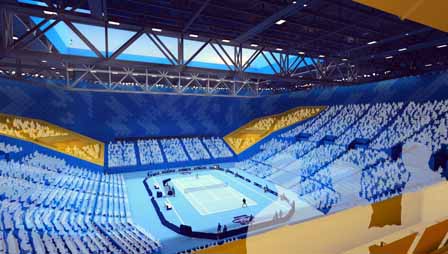 VenuesWest has revealed the interior designs for the Perth Arena - with the state-of-the-art venue set to feature a bold, colourful and geometric design.

Partridge explained "it is great to see a public building that is designed to be bold - The Perth Arena will be a great showcase for Western Australia.

"Western Australians are known for their world class efforts in entertainment and sporting pursuits and so it is fitting that we will soon have a world class indoor venue to showcase their performances.

"The Perth Arena has been designed to be a very flexible building allowing for a large variety of uses with a quick changeover in between.

"Over a full operational year, we expect more than 400,000 people will experience the peak of entertainment, sporting and dining experiences."

The striking blue of the exterior is continued through the interiors and is complemented by warm timber paneling and splashes of red, orange and yellow.

Natural light will be plentiful in break-out function rooms and the blues of the Perth sky will also feature through strategically-placed skylights in dramatically-shaped ceilings.

Locally-mined natural stone is a feature of the entry foyer, and other key materials used in the interiors include Blackbutt hardwood, perforated mesh screening, matt anodised aluminium, and feature plantation timber wall paneling. All rooms have appropriate acoustic treatments.

Design Director Howard Raggatt said their aim was to reinvent the perception of a standard arena and make something that would become an icon for the city, stating "our inspiration started with the Roundhouse in Fremantle, the designs of Middle Ages and Renaissance Ideal City drawings, and the Eternity Puzzle - like the Roundhouse, a 12-sided puzzle.

"Perth Arena has been designed to provoke symbolic interpretation, create direct visual responses from all approaches, and become an integral part of the city's overall Urban Design and Architectural Strategy."

When it is opened in 2011/12, the Perth Arena will bring to Western Australia a new raft of entertainment acts that will perform in a space the quality of which has not been experienced before in Perth. With capacity for up to 15,000 for concerts, Australia's top promoters are already talking to VenuesWest about future shows for Perth audiences.

Hyundai Hopman Cup General Manager Andrew Firman said he was pleased with the design renderings he had seen to date, adding "moving this event to the Perth Arena will create an enormous boost for all involved - players, spectators, sponsors and our team.

"I'm pleased the concept has taken into account the same world-class standards as the Australian Open."

Sited within the new Northbridge Link precinct, the Perth Arena will form an integral part of Perth's new revitalisation.

For more information on the Perth Arena, visit www.venueswest.wa.gov.au