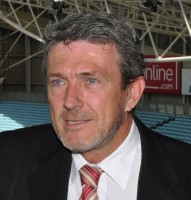 Humphreys commenced his career with the 7 Network Australia where he held the position of General Manager of the now demolished Perth Entertainment Centre and was involved in numerous other entertainment related entities owned and operated by 7 including the establishment of Red Tickets in Perth.

He moved to the Sydney Superdome (now AllPhones Arena) as General Manager in 2000 and joined the AEG Ogden family when the company assumed responsibility for the management of that venue (now Allphones Arena) in 2008.

He was the venue's General Manager until he relocated back to Western Australia for AEG Ogden in 2011 as General Manager of the new 15,000 seat Perth Arena which is scheduled to open on 10th November this year.

Humphreys was also a long standing member of venue management industry bodies including the International Association of Assembly Managers and the Venue Management Association (Asia and Pacific) Ltd.

AEG Ogden Directors Harvey Lister and Rod Pilbeam today confirmed David's sad passing, with Lister stating "we know that staff at both the Perth Arena pre-opening office and Allphones Arena as well as the broader AEG Ogden family will be devastated at today's news.

"Our thoughts and prayers are with David's children and extended family at this very sad time."