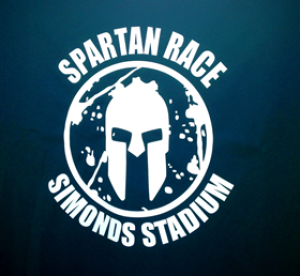 Following on from the success of its first stadium event at ANZ Stadium in February of this year, leading adventure and obstacle race event organisation Spartan Race Australia will be staging a further event at Simonds Stadium in Geelong in December.

One of four Spartan Races being held in Victoria this year, the Simonds Stadium event will be held on Saturday 5th December.

Geelong Major Events is backing the Simonds Stadium event, and two other Spartan Races, with a $45,000 sponsorship.

Spartan Race Australia Chief Executive Max DeLacy explains that the demanding events favoured versatile athletes who are strong, fast, quick-thinking and determined, while also encouraging competitors to work in teams and help each other.

DeLacy stated “unlike a fun run, which favours the skinny running-types, our races test you in many different ways..

“The obstacles are kept secret until the day. They can be anything from walls to tunnels to strength challenges, balancing exercises and also spear throws, rope climbs and other warrior-like activities.

“The idea is that it’s an all-over challenge - we try to design courses that provide a level playing field for athletes of all shapes and sizes.”

Looking forward to the races, Geelong Mayor Darynn Lyons said the event would bring an “insane atmosphere and huge crowd”, with organisers expecting 5000 competitors in the first year.

After missing out on some major events - including plans to lure a Kiss concert to Geelong – Mayor Lyons said it was pleasing to make another summer booking at the stadium.

He also told the Geelong Advertiser that he was looking forward to the Victorian Government’s trust taking management of the stadium from council in coming months and “activating” it further.

Mayor Lyons added “huge investment is going in here, and it simply has to be used more often.

“This is going to be a great event for the city. December will really be on fire with this, expansion of the Geelong Christmas program, through to the Geelong Revival and all the other events up to the Cadel Evans Great Ocean Road (bike) Race (in late January).”

Spartan Race will be staging another race at Sydney’s ANZ Stadium in October and a Brisbane event in August.

Founded in the USA in 2001, Spartan Race was voted Outside Magazine's 'Best Obstacle Race' in 2012. Spartan Race is franchised to 14 countries including Australia.

For more information go to www.spartanrace.com.au