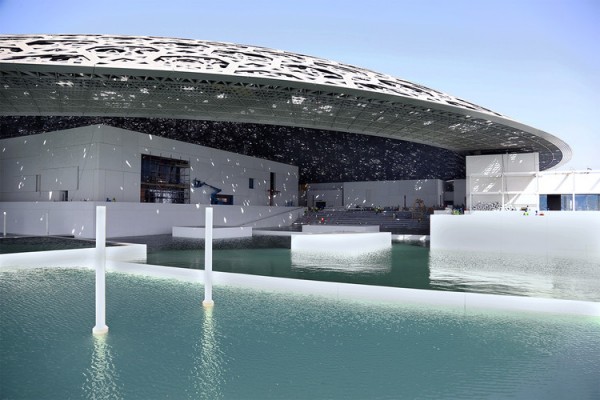 Flanked by open water on three sides, and with its basement 10 metres below sea level, the development of the Louvre Abu Dhabi museum has presented unique challenge to its builders and designers.

Throughout the seven year process to build the United Arab Emirates branch of the famous Paris museum on Abu Dhabi’s Saadiyat Island, keeping the waters of the Arabian Gulf at bay has been a constant issue, especially with dampness being so detrimental to the storage of often delicate works of art.

However, the sea has now been welcomed back, with the surrounding waters working on the existing structure to create “an archipelago filled with the delicate movement of water and reflected light”.

Brian Cole, Director with building consultants BuroHappold Engineering explained “this project combines one of the most aggressive external environments – seawater – and one of the most stringent requirements for dryness.

“Art storage is probably one of the most highly controlled internal environments, so we needed the highest degree of watertightness.”

The process of ‘flooding’" the site was completed in a few weeks, but the sequence of works that were required to get to this stage began in 2009 with the reconstruction of the entire north-west corner of Saadiyat Island. 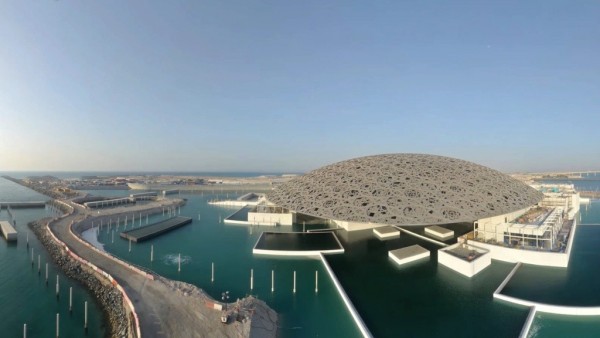 Cole stated "this enabled the construction of a platform that the museum could be built on, as well as excavation down to the required level.”

Advising that the design features a double-layer system of waterproofing, Cole added “we’ve created a watertight concrete box, not just because we’re going to have expensive artworks inside, but because the client wanted a 100-year design life.

"Repairing this building will be very difficult because it stands in the sea. Other buildings that stand in the sea, such as the Burj Al Arab, do so on a platform, but here we have the sea coming up to the sides of our building, which is quite unusual."

The construction of this enormous structure began with the installation of a retaining wall, made by dropping boulders off barges into the sea. This created a new, temporary coastline, which was then backfilled using sand pumped from the sea bed.

A hydraulic cut-off wall was made from interlocking concrete piles that descended to the island’s bedrock, and it was only once this barrier was in place that the task of draining Saadiyat’s sodden sands could begin.

Despite the retaining wall and cut-off wall, the site was not watertight. So 28 wells were dug, with pumps placed at the bottom of each. 18 of those pumps ran continuously in a Sisyphean process that involved removing an estimated 250 cubic metres of water an hour, every hour, for six years.

With the backfill drained, Bauer International, the German contractor charged with carrying out the project’s early enabling works, had to excavate 503,000 cubic metres of sand before they could build the 4,500 piles forming the museum’s foundations, a task that was completed in 2010. 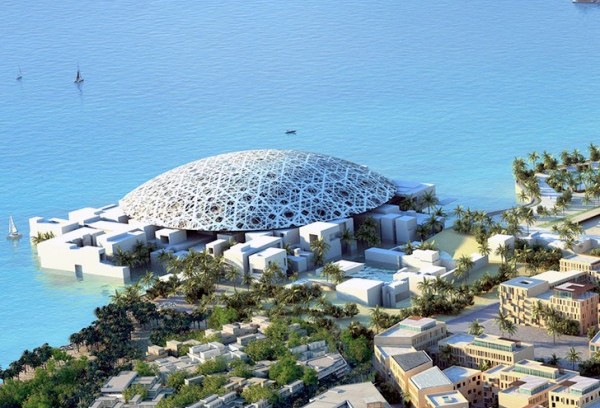 After three years of near-continuous construction, the external spaces of the long-delayed project are approaching their final state, with focus shifting to finishing the building’s interior.

With considerable work still to be undertaken, the opening date for the US$650 million project has repeatedly been delayed, with its launch now set for an unspecified date in 2017.

Originally scheduled to open in 2012, then pushed back to the second half of 2016, the landmark museum is one of a series of projects that the Abu Dahbi Government hope will diversify its economy away from oil.

Images: The waters of the Arabian Gulf encroach on the Louvre Abu Dhabi (top and middle), and how the museum will look when complete (below).