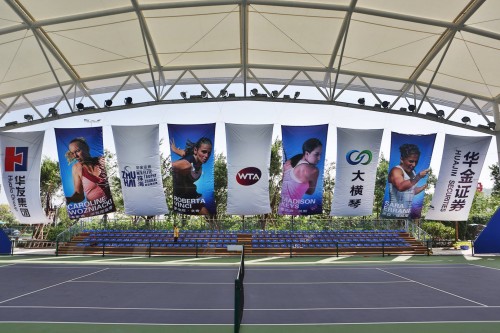 Populous are the designers behind Wimbledon Centre Court and Margaret Court Arena and this new project, the first stage of the high profile Tennis Centre was completed in September, just 12 months after construction began on the site, on Hengqin Island which is a part of the city of Zhuhai.

The facility includes a Centre Court with 5,000 seats, five other match courts and 12 training courts. The site had to be drained and reclaimed before construction began, which then included 50 metre deep reinforced piles, strengthened foundations and giant concrete slabs.

Commenting on the project, Populous Senior Principal and Director of Asian projects Andrew James “the speed and quality of construction has been very impressive.”

The WTA Elite Trophy is classified as an outdoor tournament which meant the atmosphere for players (temperature and humidity) had to be the same on the covered courts as the uncovered courts.

Populous project manager, Associate Principal Tiric Chang said the solution for centre court was to design an inner and outer roof that offered weather protection but allowed filtered sunlight and natural air flow into the arena.

Chang added “we arrived at an elegant, simple, cost effective solution– a cantilevered outer roof over the seating and a circular inner roof over the court, offering protection from the sun, enabling play to continue in wet weather, and allowing gaps for natural ventilation.

“Our vision for the arena was to establish a venue that achieves the best fan, player, and media experience with match and training facilities to accommodate and attract high profile international players.”

Zhuhai is widely regarded as the ‘most liveable’ city in China and a popular tourist destination.

The Deputy Director of the Zhuhai Culture, Sports and Tourism Bureau, Cheng Yurong, said the city is committed to continue the process of internationalization.

Yurong explained “this Tennis Centre can help elevate us onto the wider world stage, significantly helping to improve our international image and influence.”

The complex has been designed to be used as a park and community centre after the competition, open to the public on non-event days in a fully accessible landscaped environment. 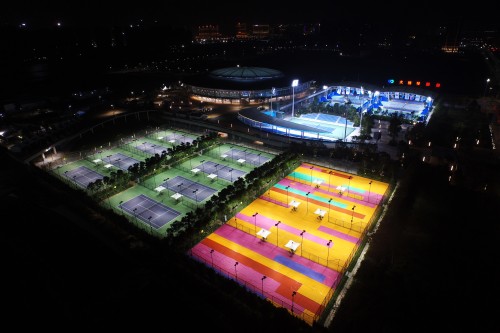 Populous was also engaged to help activate the site to make it friendly and appealing to families as well as designing an iconic entranceway of harvested and live bamboo to reflect the surrounding city landscape.

The WTA Elite Trophy Zhuhai is being held from 3rd to 8th November.