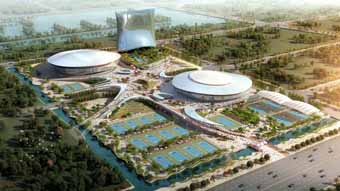 Construction has begun on the new US$84 million Zhuhai International Tennis Centre, on Hengqin Island in Guangdong Province, China, designed by global sports architects, Populous, with the first stage scheduled for completion in time to host a WTA event in November 2015.

This marks the second high-profile international standard tennis centre to be designed by Populous, the designers of Wimbledon Centre Court’s moving roof and the recently completed Margaret Court Arena in Melbourne.

The firm won the Zhuhai Tennis Centre following a high-profile international competition. All work done during the competition and then developing the design after the competition is being carried out from Populous’ Asia-Pacific headquarters in Brisbane.

Populous Asian Director, Senior Principal, Andrew James, said the market for tennis and other recreational sports like horse riding is growing rapidly in China, stating "this is not only because of an increasing middle class who have more leisure time, but also because the Chinese Government is now more focused on professional sport."

The first stage of the Centre’s development, which will be completed by next September, includes a Centre Court with 5,000 seats, as well as five other match courts, including a 1,000-seat court and 12 training courts.

Populous has carried out the architectural design, interior design and landscape design of the project.

2nd July 2014 - CATHEDRAL FOR THE MODERN AGE OPENS IN MANILA