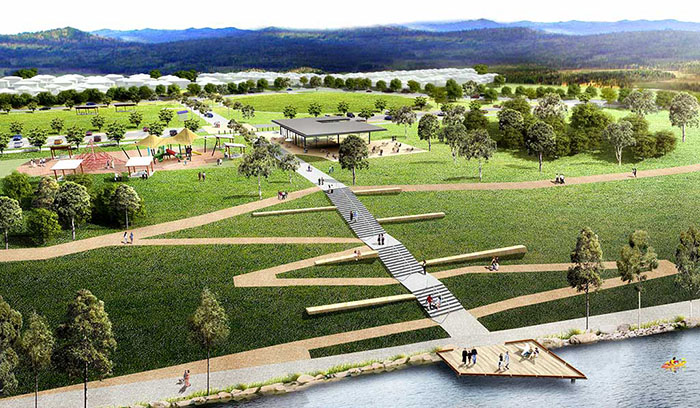 Penrith City Council is encouraging the local community to share their ideas on the design of the playground as part of the $24 million enhancement of Regatta Park.

The preliminary design shows how Council will transform the current site into a beautiful open space that will bring extensive benefits to residents and visitors to Penrith through the delivery of a large green recreational space with improved access to the Nepean River for the community to enjoy.

The project is jointly funded with $15 million from the NSW and Australian Governments as part of the Western Sydney City Deal’s Livability Program and $9 million from Council.

The enhanced Regatta Park will feature an outdoor fitness park, picnic spaces, river terraces and a large playground for children with expansive views of the Nepean River.

Penrith Mayor Ross Fowler OAM said the park enhancements were identified during extensive community consultation on the Our River Masterplan in 2013, and Council is asking the community to have their say on the playground that is included in the design.

Mayor Fowler advised “Council has been working for many years to enhance Regatta Park after the community told us that they wanted an enhanced, green recreational space close to the river during an extensive consultation process on the Our River Masterplan.

“The Masterplan seeks to improve views and access to the river as well as the health and amenity of the surrounding area, with the upgrade of Regatta Park into a large, flexible, multi-purpose space being a critical element.

“The NSW and Australian Governments have recognized the value of this project through their generous support of the Liveability Program, so I am pleased that we are able to invite the community along on the journey of enhancing this aspirational community space.

Councillor Fowler added “Council appreciates that a citizen-led approach to design of major recreational projects leads to better outcomes for the community, so we are encouraging everyone in Penrith to have a look at the preliminary design and have their say on what they want to see included in the playground.

“It is pleasing to see the Our River Masterplan come to fruition through this project and reaffirms our Nepean River as a defining feature of our city.”

Mayor Fowler noted that the development of Regatta Park coincides with a number of other major projects in Penrith, including the recently announced $12 million City Park, the design of which is also being informed by community consultation.

The local community can go to yoursaypenrith.com.au to comment on the Regatta Park design before 21st  February 2020.