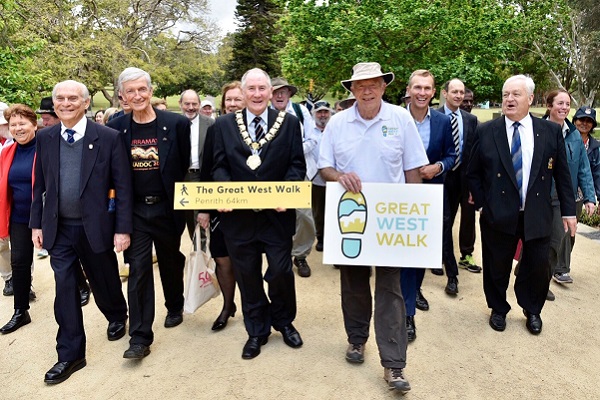 A new 65 kilometre walking trail has opened in Western Sydney, showcasing some of the region’s most vibrant cultural spaces, beautiful landscapes and oldest architecture.

NSW Planning and Public Spaces Minister Rob Stokes was at Parramatta Park today to officially open the Great West Walk, the first-ever continuous walking track from Parramatta CBD to the foot of the Blue Mountains.

Minister Stokes commented “the Great West Walk crosses through towns, parks and woodlands, over rivers and bridges, and past some of Australia’s oldest buildings housed in Parramatta Park.

“This is a huge win for Western Sydney residents and tourists and a fantastic example of the Government, community, landowners and Councils coming together to create high quality public open spaces.”

The NSW Government provided nearly $500,000 to help plan and deliver the new walk while the route was created by the Walking Volunteers - an avid group of experienced hikers who helped deliver the 760 kilometre Sydney Harbour and Coastal Walking Network from Barrenjoey on the Northern Beaches to Port Hacking in Sutherland.

President of the Western Sydney Regional Organisation of Councils (WSROC), Councillor Barry Calvert, said the scale of the walk is a testament to the power of collaboration.

He added “WSROC commends landholders including Blacktown, City of Parramatta and Penrith Councils, NSW Parks and Wildlife Services, Parramatta Parkland Trust and Western Sydney Parkland Trust, who have turned lines on a map into a fantastic community asset that will promote more active lifestyles and encourage us to explore what’s in our own backyard.

“I would especially like to thank the Walking Volunteers for their tireless work in mapping the route and providing ongoing support in bringing this project to life.”

The route forms part of the NSW Government’s Green Grid - a network of interlinked walkways, cycleways and open spaces across Greater Sydney creating green connections from people’s homes to local centres, to their workplaces and to where they spend their leisure time.