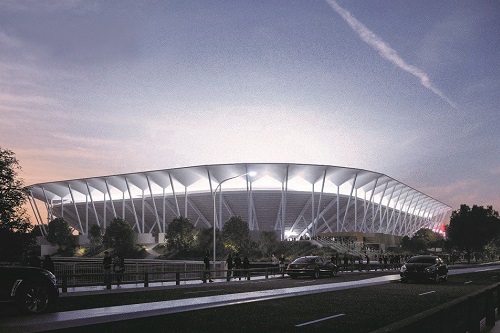 The Parramatta Eels will call Western Sydney Stadium home in 2019, having overcome a dispute with venue operator VenuesLive that will see them become the first side to play at the new venue - taking to the field over the Easter long weekend next year.

NSW Minister for Sport and Minister for Western Sydney Stuart Ayres today joined Parramatta Eels Chief Executive Bernie Gurr to announce that the Eels will play nine games at their new home in 2019 and 11 games a season across the next 15 years.

Minister Ayres stated “Eels fans should be counting down the days to the opening of Western Sydney Stadium which will revolutionise the visitor experience by bringing fans closer to the action than any other sporting precinct in Australia.

“VenuesLive, on behalf of Venues NSW, has now negotiated agreements with sporting teams including the Eels, the Wests Tigers and the NSW Waratahs and continue to secure a blockbuster line-up of exciting events for Western Sydney Stadium.”

Gurr added “we are extremely pleased to have reached this stage and announce Western Sydney Stadium as our new home.

“We believe that Western Sydney Stadium will provide our Members and commercial partners with an outstanding game day experience and will also contribute to the Club’s financial stability.

Western Sydney Stadium is set to open to fans in the first quarter of 2019.

Venues NSW has also advised the NSW Waratahs will play a Super Rugby match in Newcastle next season.

Rugby supporters from the popular rugby region will be able to watch the NSW Waratahs in their own backyard when they take on the Sunwolves of Japan at McDonald Jones Stadium on 29th March.

With the Waratahs forced to find new home venues while the Allianz Stadium is rebuilt, NSW Rugby Chief Executive Andrew Hore explained “the NSW Waratahs are a State team and the next three years provide us with a great opportunity to take Super Rugby to different venues and showcase the game from the bush to the beach.”