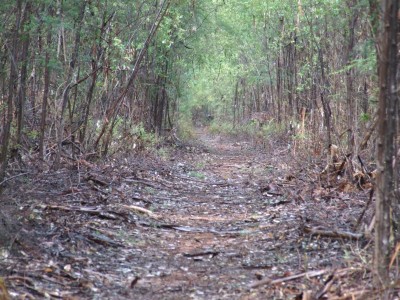 A man has attacked two Finnish backpackers with a four-wheel-drive vehicle and a shovel in a "horrifying" incident on the popular Bibbulmun Track in Western Australia.

The attacker, a 36-year-old Australian male, has been charged with making an unlawful attempt to kill.

Western Australian Police allege he rammed his vehicle into a male backpacker before attacking him on foot with a shovel.

He was subdued by the second victim, a woman, after she grabbed the shovel.

A passerby helped restrain the man until police arrived.

The Finnish man suffered a head wound during the attack. Both backpackers, each aged 33, were taken to hospital.

The incident took place on Saturday near Perth on the popular 1,000 kilometre hiking trail.

Western Australain Police allege the attacker at one point "turned his attention" to the woman, before struggling with her male companion.

During the resulting fight, the woman managed to grab the shovel and strike the attacker.

Authorities have not made comments about the man's possible motive, but said he did not know the pair.

The alleged attacker was due to appear in a court today.

Steve Sertis, a lead guide on the track, said he was shocked to hear about the incident.

Sertis told the BBC “it is a very horrifying and random event - definitely not what we'd expect to see happen on the Bibbulmun Track.

"Generally the track is a very safe place to be and to walk along, particularly around that area, which is not far from houses and quite a touristy location."