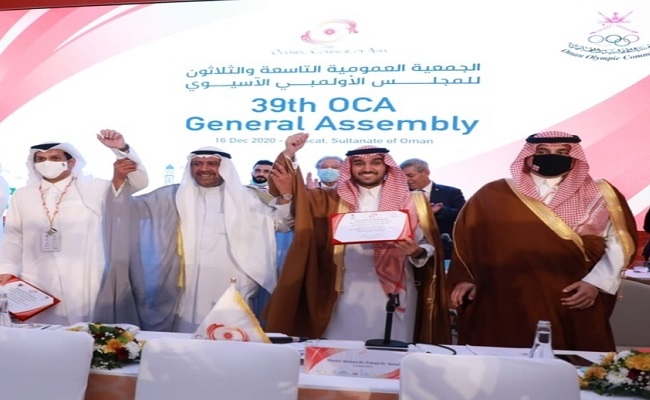 The Olympic Council of Asia (OCA) has awarded the hosting rights for the 2030 Asian Games to the Qatari capital of Doha and the 2034 to the Saudi Arabian city of Riyadh.

Announced overnight at the OCA General Assembly in Muscat, Oman, the double hosting decision is a compromise with fierce political rivals Qatar and Saudi Arabia both having been bidding to host the multi-sport event.

OCA President Sheikh Ahmad Al-Fahad Al-Sabah arranged the "win win" situation which saw the city with the most votes awarded the 2030 Games and the runner-up given the 2034 edition.

The double award plan was greeted with a round of applause when Sheikh Ahmad explained it and was voted through by the Assembly unanimously.

Prior to the vote, the Kuwaiti said he hoped to find a "solution" for both parties as the OCA always shows "solidarity and unity".

Sheikh Ahmad later told the Assembly "I believe you are making history, and I will be proud to have two Asian Games in West Asia.”

Qatar and Saudi Arabia were bidding against a backdrop of international criticism over their records on human rights, as well as a bitter diplomatic dispute which has seen Saudi Arabia initiate a blockade of its neighbour after accusing Qatar of sponsoring terrorism and backing its regional rival Iran.

Qatar and Saudi Arabia are also vying with India, Iran and Uzbekistan for football’s 2027 Asian Cup, with the Asian Football Confederation (AFC) expected to make a decision on the host next year.