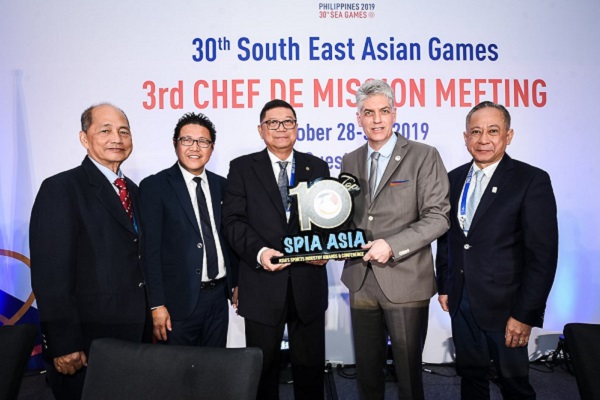 Organised by MMC Sportz Marketing, the fifth SPIA Asia 2019 is part of the sports - cultural program of the 30th SEA Games and is presented by the Tourism Promotions Board Philippines. Its main objective is always to recognise and celebrate the achievements of the ever-growing Asian sports industry and to support Pan-Asia industry growth and best practices.

Open for governing bodies, federations, sports brands, agencies, marketers and other sports organisations from 47 countries across Asia, those shortlisted will be judged on 2nd December 2019 by a panel of over 35 industry experts and the winners announced at a lavish gala dinner ceremony on 3rd December 2019 at the Grand Hyatt Manila.

Commenting on the Award nominees, Eric M. Gottschalk, Chief Executive of SPIA Asia organiser MMC Sportz Marketing, stated “the high calibre of submissions for 2019 has been overwhelming. Each year we see an increase in quality and quantity of award entries, and this year is without a doubt the best yet.

“We have received again a staggering 450+ submissions, among which the Asian powerhouses such as the Rugby World Cup, FIBA World Cup, Formula 1 Rolex Australian Grand Prix, AFF Suzuki Cup and the Special Olympics in Abu Dhabi made the 2019 shortlist.”

As Gottschalk advises “Asia has produced some incredible performances in 2019 on the international level and it was incredibly hard to produce a ‘SPIA Asia Top 10’ shortlist which is currently voted on by an expert panel of 100 industry experts from brands, rightsholders, agencies, federations and governing bodies.

3rd December 2019 will also mark the announcement of the Asian Sponsorship & Events Association which will fill a tremendous need for the industry in education, best practices, networks and recognition. Top global brands are already committed attend including of Allianz, AON, Rakuten, Twitter, Air Asia, Visa, Puma, HH and many more.

SPIA Asia 2019 culminates with the black-tie Awards Gala Dinner on 3rd December 2019 which brings together the industry's movers-and-shakers, from global agencies, governing bodies, international sports federations, global and Asian brands, event organisers and industry suppliers. Over 500 VIP guests will attend the awarding of the gold, silver and bronze awards of the top performers from 47 countries in the 25 award categories.