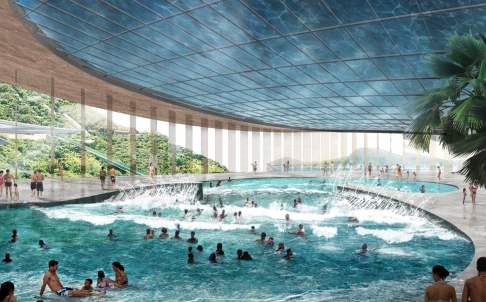 Hong Kong theme park Ocean Park has revealed detaila of its innovative new waterpark, with the release of artists’ impressions of the new attraction - which is set to open in 2017.

To spread across the steepl hillsides of Hong Kong's Southern district, the new waterpark will feature indoor and outdoor wave pools, splash pools, slides and rides - built into a series of terraced platforms.

Like Ocean Park, the attraction will enjoy extensive sea views.

In a report submitted to Hong Kong’s Environmental Protection Department, Ocean Park’s planners state “this scheme now takes good advantage of the existing slope conditions by locating ride platforms on or near the slopes to minimise the amount of structural support required.”

The report says the project is considered to be environmentally acceptable and there would be no adverse residual impact on the environment after easement measures were introduced.

The public now has a month to comment on the report until 18 June. After that the Advisory Council on the Environment will discuss if the report should be endorsed while the Director of Environmental Protection will decide if work permits can be issued to the park for the project.

The new waterpark, which is expected to attract an average of 10,00 visitors each day, is being paid for with a HK$2.3 billion government loan, announced in this year’s budget.

The centrepiece will be two elliptical indoor pools with glass roofs rimmed by plants that will let sunlight in.

More terraces will be built on the slope opposite, where the first level will house the entrance and ticketing office, an exhibition of sea turtles, changing rooms, restaurants and shops.

An outdoor wave pool, plunge pools for slides, an indoor surf rider and slides will be on level two. The next floor will have an indoor wave pool, more indoor play structures, outdoor activity pools and spa pools. The top level will feature water slides.