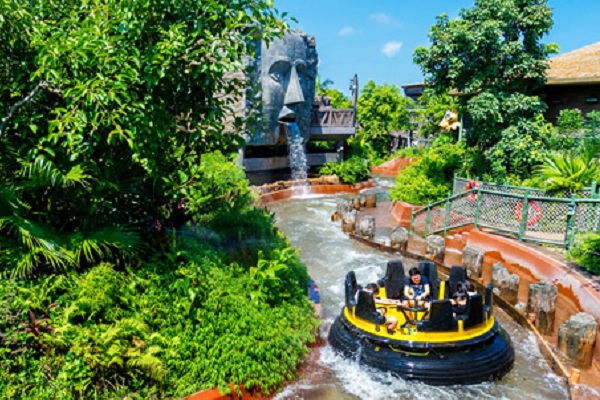 Featuring over 70 different animal species, the Rainforest offers the first-ever opportunity for the public to meet some of the most exotic South American Rainforest birds and mammals in an open aviary. Guests can also encounter Amazon species from a wildly different perspective - while onboard a raft rushing along the Rapids, the Park's latest family water ride. Dozens of avian, terrestrial and aquatic animals living inside buttress roots accompany guests on their immersive exploration of biodiversity in an attraction rich in colours, sounds, textures and conservation messages.

Located at the Ocean Park's Summit, the Rainforest is a key part of the New Ocean Park experience of edutainment envisioned in the attraction's HK$5.55 billion Master Redevelopment Plan (MRP). Guests follow the Expedition Trail to enter the Tree House, where they meet some of the world's most striking tropical species, many of which are being displayed in Hong Kong for the very first time, including the kinkajou, capybara, green anaconda, green aracari and more. Adding to the sense of adventure is the Rapids, a fun family water ride along a rushing river that surrounds the theme zone. Guests standing on the Expedition Trail can also share in the excitement by taking aim at passengers on the rafts below with water guns and water buckets.

Tsang explained "Ocean Park's Rainforest will further strengthen the tourism appeal of Hong Kong and show the world how much Hong Kong people care about nature conservation - not just in the oceans, but also in the rainforests. "

Dr Zeman added that the new attraction had been developed "to provide our guests with a sense of the biodiversity in rainforests as well as the relationship between rainforests, wildlife habitats and climate change, we have introduced into the Park dozens of the world's most exotic species, including the world's strongest animal, the largest rodent, the smallest monkey, both the largest and smallest toucans and many more.

"Guests visiting the Rainforest will feel like they are right inside the home of our animal ambassadors as they can observe some of the animals up-close without the barrier of glass or netting. Our presentation has also reached a new level of realism as many of the exhibits house multiple species within the same space, much like the way different species live in the same habitat in the wild."

As Suzanne Gendron, Ocean Park's Executive Director of Zoological Operations and Education, explains "more than half of the world's plant and animal species are native to rainforests, which makes them the world's most biodiverse ecosystems.

"The Amazon, for instance, is the largest 'pharmacy' in the world as many critical medicines, including those for diabetes, cancer and AIDS, are derived from plant species unique to the region. Rainforests are also the world's most important carbon sinks, helping curtail global climate change and reduce ozone depletion. Guests will find in the Rainforest an oversize chocolate bar, a huge coffee bag and other items to remind them how they can help protect rainforests by choosing sustainably-farmed products that are rainforest-friendly."

In terms of education, the Rainforest has a built-in classroom for new courses to be offered by the Ocean Park Academy, Hong Kong (OPAHK).