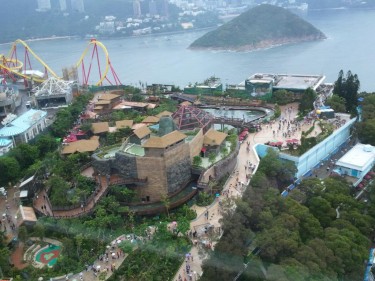 Hong Kong theme park Ocean Park hopes to reduce carbon emissions by 10% over the next 10 years having introduced a HK$50 ($6) million program, with the aim of becoming the world's first low-carbon emissions theme park.

The target was set with the help of Carbon Care Asia, a green group that helps the park conduct carbon audits to verify effectiveness and progress.

Li said that instead of using carbon-reduction intensity as adopted by most local firms, the park has decided to take a further step by reducing emissions in terms of per capita in order to divide annual absolute carbon emissions by total visitors instead of by revenue.

He added "using revenue is impractical as the reduction intensity can be easily achieved simply by raising the park's admission fee. We don't want to fool the public, we really want to do something for the environment and for our next generation."

Ocean Park Engineering Executive Director George Tso Chi-keung explained "we found about 80% of carbon emissions in the park are related to electricity consumption, mainly to maintain an ideal environment for the creatures who live there."

Measures include a series of upgrades on the life support system for animals including adopting highly efficient water-cooled chillers and refrigerants to reduce energy loss.

The environment will be controlled by computer monitoring of the exchange of water, the inflow of fresh air and water flow rates.

Also, pipes drawing seawater for tanks will be re-routed to shorten the length of the journey, thereby creating a more efficient circulation system.

By adopting solar-powered electric carts for transportation inside the park, energy usage will also be reduced by 40%.

Ocean Park expects its annual number of visitors to increase to eight million in 2022 from seven million this year.