nib to back Perth venues for another three years 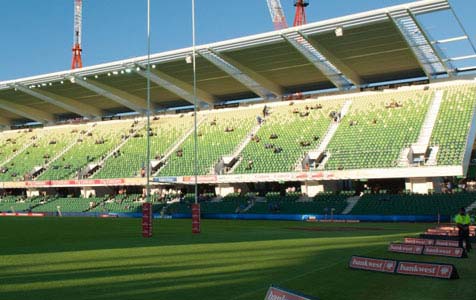 Private health insurer, nib health funds, has reaffirmed its commitment to VenuesWest and sport in Western Australia by agreeing to extend its naming rights sponsorship of nib Stadium.

The new three-year deal will come into effect from 1st July 2015 and follows on from the original five-year agreement nib entered into in 2010.

nib Stadium is Perth’s premium rectangular venue and is owned and now managed by VenuesWest on behalf of the Western Australia Government.

The venue is home to Perth Glory (A-League) and the Western Force (Super Rugby), and has also played host to 2014 National Rugby League Grand finalists Canterbury- Bankstown Bulldogs and South Sydney Rabbitohs, who have fixtured home games in Western Australia.

VenuesWest Chairman Graham Partridge OAM said he was thrilled that nib is continuing its partnership with VenuesWest as the naming rights partner of the venue, stating “nib’s strong focus on promoting healthy living and supporting the local community is very much in alignment with VenuesWest’s commitment to delivering health and participation opportunities for individuals and families and directly supporting high performance athletes in WA.”

nib Chief Executive Officer, Mark Fitzgibbon, said the stadium has played a major role in growing the nib brand in a relatively new market for the health insurer, adding “the nib Stadium sponsorship has been an important component of our overall marketing strategy in Western Australia. Over the past four years it has been exceptionally effective in driving recognition and recall of our brand in this market.

“Through widespread references in the media and everyday conversations, the nib name is now part of the Western Australia vernacular.

“The extension of our current naming rights arrangement not only reinforces nib’s commitment to the venue’s future, but also to the growth and development of our business in Western Australia.”

In 2013, the Western Australian Government invested $95 million into the redevelopment of nib Stadium, which included the construction of the eastern and southern grandstands, as well as the installation of new electronic scoreboards and a vision screen. In sporting mode, the venue’s capacity is 20,300.