Developer Lendlease has unveiled plans for a new billion-dollar city precinct for Melbourne, which will have an elevated ‘sky park’ at its heart.

The proposed $1.9 billion Melbourne Quarter will be a 2.5 hectare block in the city’s business district, between the famous Collins and Flinders streets and located close to Zaha Hadid’s planned vase-inspired mixed-use tower.

Alongside offices and residential apartments, a range of any public leisure facilities are planned and over half of the development is dedicated to public open space.

At the heart of this public space will be the 2,000 metre² Melbourne Sky Park - elevated 10 metres above the cityscape. Designed by Australian architects Aspect/Oculus and inspired by New York’s High Line, the park is designed to enhance the health and wellbeing of the public and office workers in the district, and will feature a signature restaurant.

Introducing the project, Jonathan Emery, Managing Director of Lendlease's urban regeneration arm explained “everyone will be able to enjoy a high quality public domain with a focus on rich greenery and landscape as well as a vibrant retail and food and beverage offering that will rival the best of Melbourne's central business district. 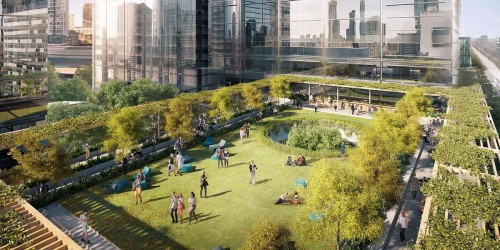 "Melbourne Quarter is designed to connect people with nature in buildings and in the urban environment to improve amenity, productivity and liveability.

“Melbourne is sophisticated, successful, proud, seasonal, natural, cultural and liveable. These characteristics have been pivotal in informing us to create our vision for a thriving new city block that will encapsulate public amenity, green spaces and wellness without forgetting the renowned authentic Melbourne experience in the world’s most liveable city.”

Victorian Planning Minister Richard Wynne, has reportedly approved the first phase of Melbourne Quarter and construction is expected to begin this year, with completion scheduled for 2018.

Lendlease is also developing plans for Melbourne Square, a new space similar in size to the existing City Square, as well as a new neighbourhood park on Flinders Street.