City of Melbourne releases concepts for the renewal of University Square 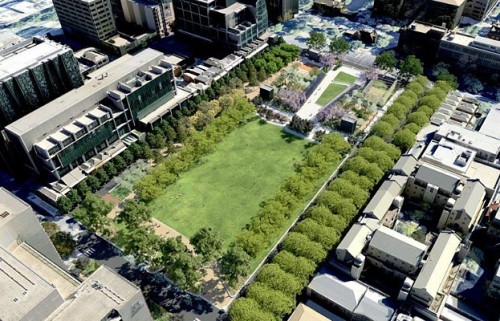 The City of Melbourne is inviting the community to have their say on a draft concept plan for the redevelopment of University Square in Carlton.

"Melbourne’s gardens, parks and open spaces are a major contributor to our status as the world’s most liveable city: it is vital that we plan and invest now to ensure future generations continue to have access to quality green areas."

Interested parties are currently being invited to have their say on the proposal and what they would like to see in the final design. Input is invited up until until Friday 2nd October 2015,

The redevelopment will include the construction of a two million litre underground stormwater harvesting tank at Lincoln Square to supplement the irrigation needs of University and Lincoln Squares and to reduce flooding in the Elizabeth Street catchment.

City of Melbourne Environment Portfolio Chair Councillor Arron Wood, said the draft concept plan demonstrates that by closing Barry Street and most of Leicester Street it could increase open space in University Square by up to 40%.

Councillor Arron Wood stated "this year we are spending $3.75 million of a projected $15 million over the next three years to create parks that would otherwise cost us more than $225 million to purchase.

"We've got an ambitious target of adding 24 hectares of new open space over the next 10 years as part of our open space strategy, and its smart projects like this that will see us realise that goal. We know that open space has multiple benefits such as helping to cool the city, reduce flooding, increase adjacent property values, and improve community health and wellbeing."

One of the city’s most patronised bus services, the 401 bus from North Melbourne station to Melbourne University, would not be impacted by the proposed changes.

The improvements to University Square will help to cater for Carlton’s growing population which is expected to increase by 28% over the next 20 years.