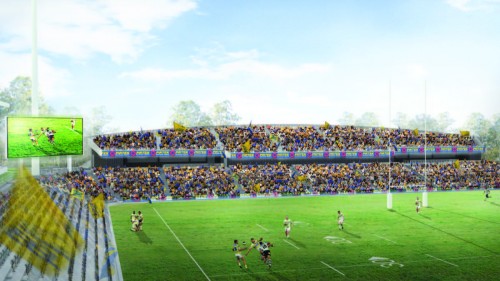 The Western Sydney Stadium at Parramatta is a step closer with the NSW Government calling for Expressions of Interest from the private sector to design and construct the new $300 million venue.

Announcing the EOI for the new 30,000 seat rectangular venue to be constructed on the site of the existing Parramatta Stadium (currently known as the Pirtek Stadium under a naming rights deal), NSW Minister for Sport Stuart Ayres stated "the new Western Sydney Stadium will be the first project delivered in the NSW Government’s stadia strategy and will replace a 30 year old facility with a world class venue.

“One of the key requirements will be for applicants to have previous experience in designing a stadium, along with meeting a range of other important financial and technical requirements.

NSW Minister for Transport and Infrastructure Andrew Constance said the project will be assessed as a State Significant Development with planning approval to be obtained in two stages for stage 1 demolition and masterplan work and stage 2 design and construction of the new facility.

Minister Constance stated “an Environmental Impact Statement for stage 1 approval will be publicly exhibited in the coming months when club members, supporters and the community will be able to find out more about what is proposed and to have their say on the plans,” Mr Constance said.

“The plans will incorporate the latest international design and technology standards to ensure it can meet the needs of multiple sporting codes and teams and deliver the best outcomes for the community.

“The successful contractor will be responsible for obtaining stage 2 planning approval.”

Infrastructure NSW, through its specialist unit Projects NSW, is responsible for the procurement and delivery of the new Stadium and will work in close partnership with Venues NSW, which manages the existing Parramatta Stadium facility.

The contract to design and construct the new Stadium is expected to be awarded later this year with the new facility set to open in 2019.

The Ministerial announcement on the new Parramatta Stadium made no mention of the future of the Parramatta Swimming Pool Centre.

With previous announcements advising that the historic facility will be demolished to make way for the new stadium, objectors have highlighted that the pool could be retained as part of the new venue – in the way that Sydney’s Allianz Stadium has an adjacent pool.

Community groups battling to retain the Pool will be holding a public rally at 11am on Sunday 5th June in the Parramatta Stadium carpark.