The NSW Government's announcement on the $1.6 billion funding of Sydney's major sports stadia also includes a $40 million allocation for the NRL Centres of Excellence fund, under which NSW NRL clubs will be able to refresh their local facilities on a dollar-for-dollar basis.

The funding, while representing a relatively small percentage of the total stadium's package, will have significance for suburban grounds such as Sydney’s Leichhardt Oval, Shark Park (pictured below), Brookvale Oval and WIN Jubilee/Kogarah Oval.

Current NSW Minister for Sport and Recreation Stuart Ayres and his predecessor Graham Annesley had, in 2012 and 2014, indicated that the NSW Government would no longer invest in traditional NRL venues.

In 2014, Minister Ayres suggested that Sydney's nine NRL clubs would only survive by generating more revenue from higher memberships and use of the bigger venues. 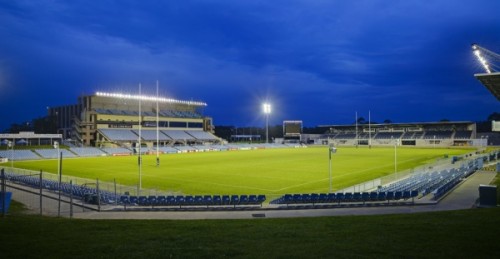 He was quoted by Sydney newspaper The Sunday Telegraph as stating "if you’re an NRL club driving towards 20,000 to 25,000 members, the suburban ground will not service your membership and won’t have enough seats to sell to other customers as well.”

However, the Bulldogs playing a single home game at their traditional home ground, the Belmore Sports Ground, and attracting large crowds over the last two NRL seasons, has shown that suburban grounds remain popular.

Commenting on the fund, NRL Chief Executive Todd Greenberg stated "this is an historic day for rugby league … one which will give our fans the comfort and facilities they deserve.

“Our aim was to ensure that rugby league benefited from any allocation of stadium funding - and this package delivers that outcome.”