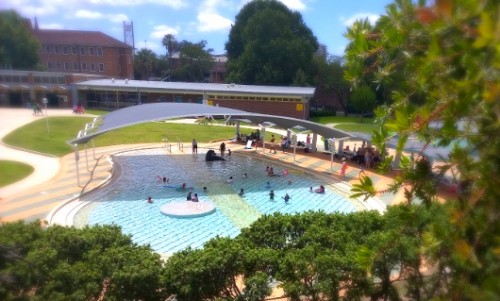 While future developments of Sydney's stadia have been confirmed by the NSW Government this week, Parramatta City Council is demanding the reinstatement of a new aquatic facility if the current Parramatta Swimming Pool Centre is demolished as part of plans for the expansion of Pirtek Stadium.

The Council is calling for the NSW Government to develop a new aquatic centre within the new stadium precinct or for it to provide funding and an alternative location for a future pool to be built.

In a mayoral minute, Parramatta Lord Mayor Paul Garrard stated “Council has been informed that it is highly likely that the swimming centre will not be able to continue to operate in its current configuration.

“Council notes also that the state government is yet to offer any financial compensation to assist council with the cost of funding an alternate facility.”

The pool was developed on its present site after the Second World War and its original name, the Parramatta War Memorial Pool, commemorates those who served in the conflict.

While the Council supports the development of the new stadium, it only recently learned that its planning included demolition of the pool.

The destruction of the pool is not a traditional case of compulsory acquisition, as the Council leases the land for the pool from the Parramatta Park Trust on a month by month basis.

A preliminary environmental assessment for the project said the demolition of the existing stadium and pool was expected to start in November and would be completed within four months.

However, NSW Sport and Recreation Minister Stuart Ayres has reportedly stated that a "transition plan" would be made so the pool could remain open for at least one more summer.

Parramatta Memorial Swimming Club President Peter Ayoub​ said he hoped it was not too late for the pool to be incorporated into the stadium redevelopment.

More detailed plans for the stadium redevelopment are expected to be submitted in the coming weeks.