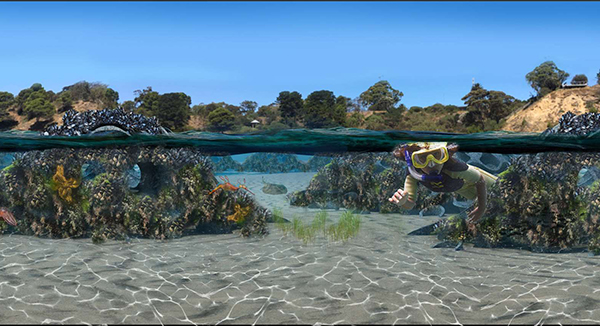 The City of Greater Geelong has partnered with a Melbourne based artificial reef designer to create an eco-tourism marine attraction for The Dell at Clifton Springs. The Dell has a rich natural history and cultural history and is a popular spot for picnics and swimming.

Melbourne-based industrial designer and manufacturer Alex Goad, from Reef Design Lab, has been engaged to design and fabricate the reef units. The Sculptural Wave Attenuator will be made up of a series of dynamic modular reef units, which will create an undulating landscape and host a range of habitats for marine life.

This re-creation of habitat will assist in restoring marine reef communities in Port Phillip Bay.

The striking array of modular reef units will also work to reduce wave energy and curb erosion along The Dell’s local coastline.

Greater Geelong Mayor Stephanie enthused “we are excited to be working with a designer of the calibre of Alex, whose ground-breaking work has attracted international acclaim for its environmental and artistic outcomes.

“The Sculptural Wave Attenuator will enhance the area’s sensitive environment and provide an educational and eco-tourism drawcard that will appeal to a wide range of visitors.”

The project aims to install an initial six reef units off The Dell beach this autumn.

The reef units will be colonised by a range of native species, such as mussels, seaweed and invertebrates.

The sculptural reef would be safely enjoyed at both high and low tides, offering shallow swimming or walk-through opportunities for residents, students and tourists.

The initial stage of the project is being delivered with a budget of $30,000, If successful, it will be followed by subsequent stages with a total budget of about $200,000.

The project follows a shift in focus from the original Sunken Gallery concept to a clever and creative initiative that provides environmental and educational benefits.

“It will highlight how artistic sculpture and technology can combine with ecology to improve biodiversity and protect our coastlines and marine communities.”

The project also addresses public interest in delivering a sensitive development that protects and enhances The Dell’s natural assets.

The new installation will complement The Dell Historic Mineral Springs Boardwalk, which will provide safe pedestrian access around to the next beach in most conditions.

Funded by the Victorian Government’s Pick My Project initiative and managed by the City, the boardwalk will be completed and opened in coming months.

Since it was installed in 2018, the 130-metre long reef has been colonised by marine communities, including shellfish, and is effectively reducing wave energy and preventing further erosion of the heavily impacted Rambler’s Road foreshore.