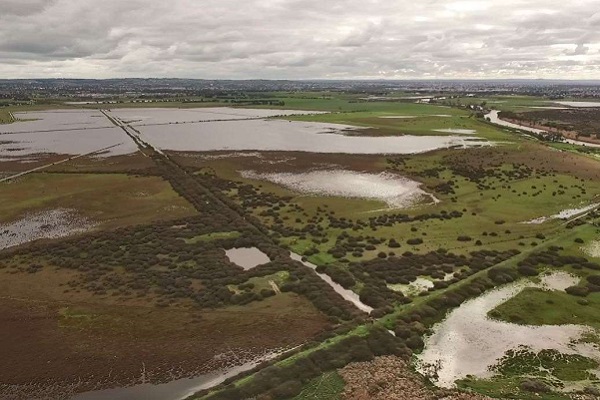 Having last year acquired the 500-hectare Sparrovale wetlands, the City of Greater Geelong is looking to expand public access to the area under an innovative project.

The future Sparrovale Nature Reserve, the largest nature reserve managed by the City, will combine environmental and community benefits with an important drainage solution for Armstrong Creek’s growing residential population.

Diverse natural and constructed wetlands will occupy about 200 hectares of the property, which adjoins the Barwon River and the internationally significant wetlands of Lake Connewarre and Hospital Swamps.

The Sparrovale wetlands will be managed to protect biodiversity, which has been highlighted as the theme of this year’s international World Wetlands Day tomorrow (Sunday 2nd February).

They will be home to a large number of migratory shorebirds and waterbirds, including sharp-tailed sandpipers, whiskered terns, a variety of ducks, herons, stilts and brolga.

While construction of the stormwater system is underway, the site is not open to the public. However, once works are complete, visitors will be welcome to enjoy the natural environment and open space of the area.

Residents will be able to help shape the design of the new public parkland through the development of the forthcoming Sparrovale Master Plan.

The sustainable wetland reserve project provides another chapter in the fascinating history of the Sparrovale site, which is part of the Barwon River floodplain.

The wetland environment long provided an abundance of seasonal food and resources for the Wadawurrung people, who used the strappy vegetation to make baskets and build fish traps.

The site would later become the inaugural home of the Geelong Racing Club, with the first racecourse built in 1849.

It hosted the Geelong Cup from 1872 to 1906, before the club moved to the current racecourse in Breakwater.

The farm was called Sparrovale after ER Sparrow, the secretary of the Geelong Racing Club.

Commenting on the project, Greater Geelong Mayor, Stephanie Asher stated "Sparrovale is an exciting project that will deliver a world-class wetland and a practical drainage measure to support the expanding Armstrong Creek community. It is a living example of a clever and creative solution that also aligns with our intention to take a leadership position with sustainability.

"A key aspect of our Sustainability Framework is measuring and managing our environmental impacts."

The City will present an overview of the Sparrovale wetlands project at the National Wool Museum on Saturday 28th March, as part of the Geelong Nature Forum.

Image: The Sparrovale Nature Reserve, courtesy of the City of Greater Geelong.