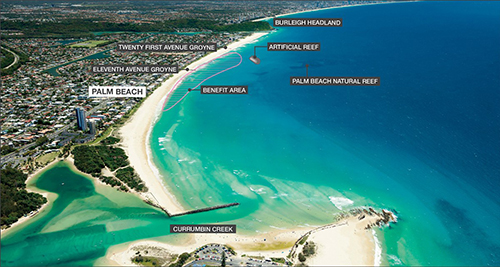 The construction contract was awarded in October 2018 to HC2, a joint venture between Hall Contracting Pty Ltd and Heron Construction Company, with work expected to commence in April and construction to be completed by October.

Historically, Palm Beach is one of the Gold Coast’s most vulnerable beaches to the threat of coastal erosion. The construction of the Palm Beach Artificial Reef is part of the implementation of the City’s Ocean Beaches Strategy 2013-2023, to enhance coastal protection at Palm Beach. 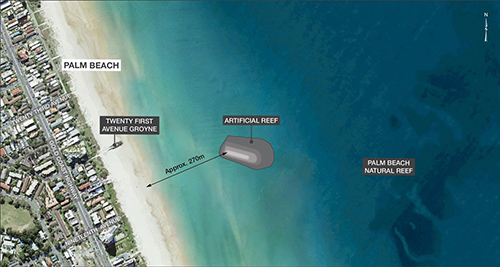 Phase 1 was completed in September 2017 and saw the successful nourishment of Palm Beach with more than 470,000 cubic metres of clean sand. Construction of the artificial reef is phase 2 of the Palm Beach Shoreline Project.

The reef will be positioned approximately 270 metres offshore from Nineteenth Avenue in Palm Beach between the beach and the existing natural reef and will be constructed out of rock boulders. It will be 160 metres in length and 80 metres wide. At its highest point, the reef will be 1.5 metres below the surface at average water level, identified with permanent marker buoys for marine safety. This innovative underwater structure is expected to influence the surrounding waves and currents to promote a long term increase in sand along vulnerable sections of Palm Beach, providing a protective buffer from erosion. 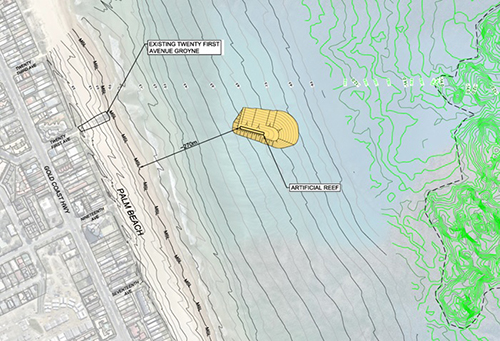 Much research has gone into the design of the artificial reef including computer modelling, wave tank testing and real-life coastal data capture including wave data, aerial photography and analysis of over 50 years survey data to see how the beach behaves not just above the water line, but underneath the water too!

In some conditions, an offshore recreational surf break may be formed giving further amenity to the city's growing surf community.

The Gold Coast Council’s Surf Management Plan was developed in 2015 and recognises the value surfing provides to the Gold Coast's lifestyle and economy.

The Surf Management Plan seeks to balance the interests of all beach and ocean users in line with the City's Ocean Beaches Strategy – specifically that their beaches are open and inclusive and remain healthy and clean.

The vision for the Surf Management Plan is to provide world’s best practice coastal management strategies to preserve and enhance the surf amenity of the Gold Coast.

Commenting on the initiative, Mayor Tate commented "all necessary planning for phase 2 of the project has been done and we are now ready to commence. The second phase will add significant protection to one of our most vulnerable stretches of coastline.''

Advising that residents can view construction from as early as April, weather dependent, Mayor Tate added "residents will see construction vessels on the water working around the clock. There will be some lights reflecting from the work at night but not enough to disturb residents.

"Marine construction is always weather dependent so construction may be delayed or brought forward, depending on conditions."