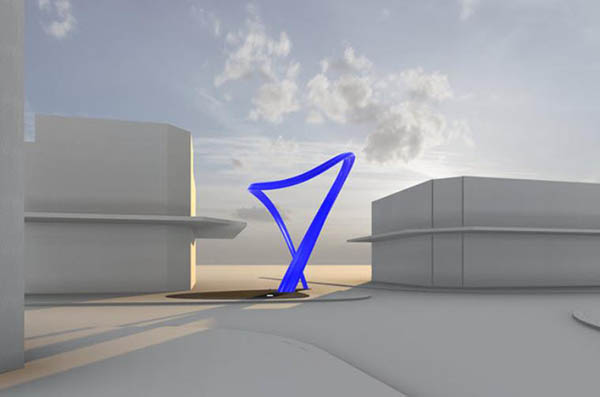 As part of the City of Perth’s East End Revitalisation project, Perth will see the installation of a new public artwork, Cygna (The Swan), a modernist interpretation of Perth’s graceful black swan and the winding Swan River.

Due to start construction in June, the City of Perth’s East End Revitalisation project aims to improve the environment and character of the east end, focusing on community vibrancy and accessibility.

Standing on the corner of Hay and Pier Streets as a visual drawcard, Dr Jon Tarry’s concept Cygna (The Swan) will develop notions of cultural mapping, rivers and flight paths of birds.

As part of the City of Perth’s One City approach of working alongside artists, it was identified a landmark piece was important to attract people into the east end, maximising sightlines down all streets linking to the Hay and Pier Street intersection.

Made using advanced technologies and materials, Dr Tarry said the concept was inspired by elemental forces and the meandering path of the Swan River adding “the black swans articulate their neck with agility which, like the river, emerges as sculptural loop suggesting a connection down Pier and Hay Streets to the river.

“This work has a resonance with art and architecture in this city, interacting with the city’s unique cultural topography and art.

“It is a work about absence, presence, being present and simply being. It is an artwork of engagement with, of and for people.”

Dr Tarry said it was an honour to create an artwork of this complexity in a significantly historical site.

City of Perth Chair Commissioner Andrew Hammond advised “with the artwork visible from St George’s Terrace, Barrack Street, Murray Street and Irwin Street, we wanted it to act as visual drawcard, responding to the flora or fauna of the region.

“Focusing on a positive sense of place and contribution to neighbourhood character, the proposed concept is visually striking and is expected to have different meanings to people who interact with it.”

The Revitalisation project will also include a pedestrian priority zone, an increased canopy cover, widened footpaths and street lighting and furniture.

Work on Cygna is due to begin in May, with installation projected for November 2020.