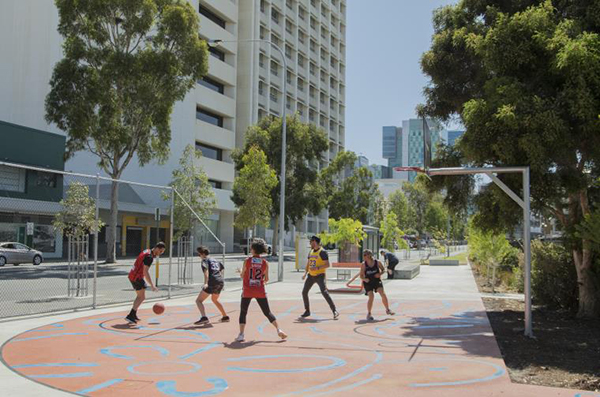 The City of Perth has turned an unused space on Wellington Street into an area of public amenity and vibrancy, with the new space between Barrack and Pier Streets including a three aside basketball court, ping pong table and elements suitable for skating.

Outdoor furniture, seating and shade will provide respite for those wanting to take a more relaxed approach.

The project is part of the City’s minor urban intervention movement helping to energise and most importantly, humanise the city’s leftover spaces and reinvigorate the existing.

City of Perth Chair Commissioner Andrew Hammond advised “the idea of these small urban interventions has been referred to as urban acupuncture – seeing the city as a living and breathing organism with areas needing healing or repair.

“The City of Perth, like many cities around the world, is using imaginative, small interventions to socially enrich city spaces and further extend their point of difference.”

The below courts are just a few that can be discovered in and around the City’s boundary.

Elizabeth Quay Basketball Court
Located on the Esplanade, Elizabeth Quay boasts a great location for a game or two of basketball. Last year, the courts received a beautiful and bold coat of paint thanks to Brighton artist Lois O’Hara.

Donnie Taco Basketball Courts
Free for daytime play and close to Kings Park, Donnie Taco is the perfect place for a morning or afternoon of shooting hoops.

McCallum Park
With plenty of shady trees to relax under, McCallum Park provides the perfect location for a couple of basketball games before taking to the trees for a rest and recoup.