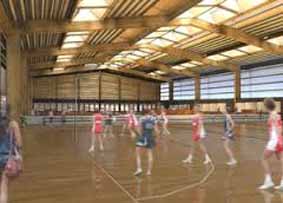 Netball NSW today begins a new era with its move into its new $35 million centre of excellence, Netball Central, at Sydney Olympic Park.

After the works began in February 2013, construction is nearly complete on this impressive, purpose built, world-class netball facility.

Speaking in advance of the move, Netball NSW Chief Executive Carolyn Campbell explained “Monday will certainly be a very special day for netball in New South Wales as we relocate to this stunning facility."

In addition to being the administration Headquarters of Netball NSW and the NSW Swifts, Netball Central will house a 'show court' with seating for approximately 850 people plus five further courts (all courts feature state-of-the-art timber sprung flooring), a training and education room, extra meeting rooms, medical facilities, a Café, and it will also be home to the Netball NSW Hall of Fame.

And aside from the physical features and inclusions, Netball Central is a very smart, eco-friendly building which users won’t be able to see but will feel the benefits of.

Campbell continued “during the initial design phase, it was important to us that the building was as environmentally and economically friendly as it could be.

“Now that the facility is nearly completed, we are delighted with the number of eco-friendly features incorporated into the final product, including the natural ventilation of the courts instead of traditional air-conditioning.” 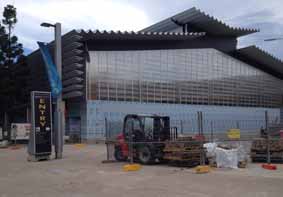 For the Netball NSW Board and Executive, this facility has been a decade in the making, with the reality far exceeding the original vision.

Netball NSW’s move to Netball Central means the organisation will now vacate the Anne Clark Centre in Lidcombe, which has been the much-loved home of netball in NSW for 34 years.

Campbell concluded “the vision for Netball NSW and the sport in the State moving forward is hugely exciting, but we are all a little emotional about leaving the Anne Clark Centre, because the sentiment and history we’ve created here has enabled us to move to a facility such as Netball Central."

The vision for Netball Central has always been to inspire, develop and produce the finest athletes, coaches, umpires and administrators for generations to come, and Netball NSW is hugely excited to show this facility off to the wider community with a number of open days in 2015 (details to be announced in due course).