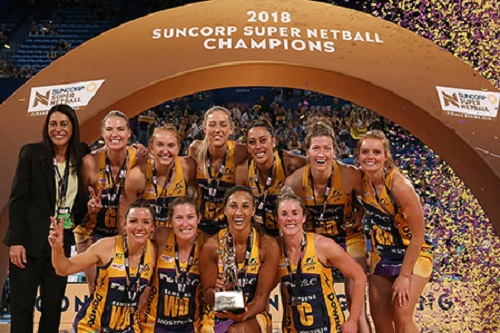 Netball Australia has announced that a new independent commission will govern its Super Netball competition.

Netball Australia will follow the lead of the AFL and NRL in handing day-to-day control of the Super Netball league - which is about to enter its third season - to a new independent commission.

Netball Australia advised that it is establishing the Commission ahead of the 2019 season to ensure the league has every opportunity to continue to grow and compete, with the Commission to oversee and make all decisions relating to the league and bring additional and focused authority, influence and commercial leadership to ensure the long-term sustainability of the league and clubs, which is about to head into its third year of existence.

Netball Australia Chief Executive Marne Fechner said the establishment of the Commission is a turning point for the sport with commissioners to bring specialised expertise to continue the advancement and evolution of the league, with a focus on commercial growth.

Fechner explained “the vision for Suncorp Super Netball is to be the top sporting league for women worldwide, and to achieve that we need to put the necessary structures and resources in place.

“We’re excited that Suncorp Super Netball is taking this step forward and believe the Commission will provide a more focused and streamlined operating model that will fast track growth in all key measures of the league.”

Fechner will sit on the commission along with six independent members, with relevant skill sets, to be appointed by the board.

Suncorp Super Netball will remain wholly owned by Netball Australia but the Commission will be given the mandate to self-govern and lead its own operations.

With the rise of the Matildas, WBBL, AFLW and women's rugby league, Fechner said the move would allow them to forge ahead with plans to make Super Netball a global benchmark for women's sport.

She added "to achieve that, we need to put the necessary structures and resources in place."

Super Netball replaced the former trans-Tasman Championship in 2017 with Netball Australia signing a five-year revenue-sharing agreement with the Nine Network.

Minimum player wages are set to spike this season to $30,000, with all eight clubs agreeing to a cap increase of $15,000 to take the total salary pool to $5.32 million each year.