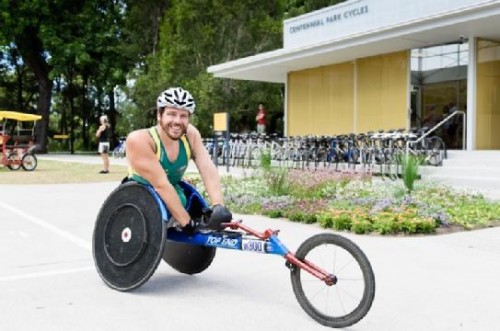 Former runner Steve Moneghetti has also been promoted to the position of Deputy Chair of the sport agency while Jenn Morris has been reappointed to serve on the Board for another three years.

Announcing the three-year appointments, Minister McKenzie advised "the appointments will strengthen the commercial capability of the organisation and have been made at an exciting time for Australian sport as Sport Australia plays a lead role in the delivery of the Government’s Sport 2030 - National Sport Plan.

“Sport 2030 is a cohesive, long-term strategy for Australian sport with a clear focus on participation, performance, improved physical and mental health and maintaining the integrity of our sports.

“The commissioners will strengthen the implementation of Sport 2030 given the wide-ranging skills and extensive experience they bring to the table.”

Fearnley’s athletics career for Australia spanned five Paralympic Games campaigns, culminating with his wheelchair marathon victory at the 2018 Gold Coast Commonwealth Games, where he was also chosen to be the Australian flag-bearer for the closing ceremony. Adding to his powerful athletics performances, Mr Fearnley has become an icon and advocate for people with disabilities in sport and the broader community, recently awarded NSW Australian of the Year. A former physical education teacher, Mr Fearnley also sits on several panels and councils, including the International and Australian Paralympic Committees.

Laing has two decades of experience in senior executive roles with leading media and entertainment companies Nine Entertainment Co and Foxtel. She is currently Chief Commercial Officer at Foxtel, with extensive experience across Australia’s free-to-air, broadcast, print, digital and streaming landscape. She is also a member of the Australian Rugby League Commission.

Ireland was a VFL footballer with Collingwood in the 1970s, but his early playing retirement led to a successful career in sports administration and management. He was Chief Executive at AFL club the Brisbane Bears/Lions from 1990 to2001, before moving to the Sydney Swans, where he held the role of Chief Executive from 2009 until his retirement last year. Ireland is a Life Member of the AFL and a graduate of the Australian Institute of Company Directors.

Chair of Sport Australia John Wylie welcomed the new appointments, saying that they will bring fresh ideas and approach that will further improve sporting outcomes.

Wylie advised “these four new appointees are highly accomplished and respected Australians across a range of fields and we are fortunate that progressing Australian sport is a passion they all share. I have every confidence their valuable perspectives and experience will benefit the Sport Australia Board and, in turn, Australian sport.

“I also want to take this opportunity to thank Kate Bates, a wonderful Olympian and world champion cyclist who is taking up a Board position with Cycling Australia and will step down from her role on the the Sport Australia Board.

"Kate served on the Sport Australia Board for three years, including on the Finance Audit and Risk Committee.”