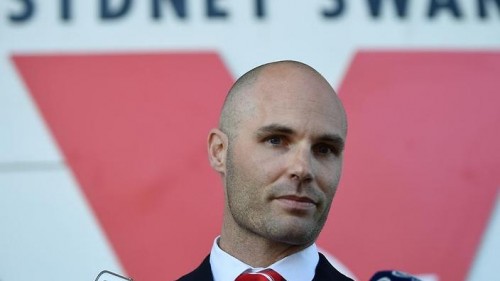 The Sydney Swans have announced that Tom Harley, their current Football Operations Manager, is to succeed the long-serving and highly respected Andrew Ireland.

The succession plan will see Ireland mentor Harley into the role, with the handover to occur at the end of 2018.

Harley, the former Geelong dual AFL Premiership captain, joined the Swans at the end of 2014, and had briefly been suggested as a possible candidate to replace the recently departed Simon Lethlean as the AFL's Head of Football Operations.

Ireland, aged 64, a Collingwood grand final player in the 1980s, is one of football's most enduring administrators. He helped steering the Brisbane Lions to their first premiership in 2001, before joining the Swans where he has played a major role in establishing Sydney as one of the AFL's most stable and successful clubs, playing a part in the premierships of 2005 and 2012, having become Swans chief executive in 2010 after a previous senior role in the club's football department.

Sydney have used succession plans successfully in the past, most notably when John Longmire took over from Premiership coach Paul Roos at the end of 2010. The transition has proved highly successful, with the Swans making the finals every year of Longmire's tenure, winning one premiership already as well as losing two grand finals.

Announcing the appointment in a statement, Swans Chairman Andrew Pridham said that Ireland had been a "fundamental driver of a culture and process" that delivered success, adding "Andrew informed us of his intention to retire in early 2016, and after due consideration from the Board we determined a succession plan with Tom Harley was the best fit to take our club forward.

"I have the upmost confidence in Tom's capacity to undertake the role of CEO with energy and imagination. I expect that he will build on the incredibly strong foundation laid by his predecessors and the senior executive team over many years."

Ireland, who will have been at the club 17 years by the end of next year, said it was the right time to leave, commenting "I've had a wonderful time at this club, it's a great club, but there does come a time when you need to step aside.

"I'm rapt that Tom will be my replacement as I'm certain he has all the attributes to be a strong CEO for the Sydney Swans – he's a great leader and culturally a terrific fit for the club."

Welcoming his appointment, Harley concluded “when you're involved in the AFL in Sydney you see it through a totally different lens and the Swans have reaffirmed my passion for the game, so it's a real privilege and an honour to take this opportunity.

"I'm very honoured and humbled to be endorsed by Andrew and the board. Under Andrew Ireland I've had a great learning experience and I think our team, from the football department to the broader staff, understand what I stand for."

Harley, who played 198 games for the Cats, was appointed the Swans' head of football in late 2014 after spending time as the General Manager at AFL NSW/ACT.