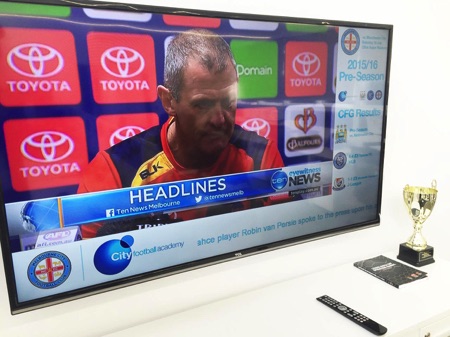 Melbourne City FC has taken a lead from work done by its sister club, Manchester City, in implementing digital signage as a way of interacting in a dynamic, effective and modern way.

As City Football Group (Australia) Head of Infrastructure Ian Wilson explains “our colleagues in the UK had done a lot of work in finding a technology partner for its digital signage deployment at the Etihad Stadium and the head office in London and so, acting on their recommendation, we engaged with Tripleplay’s Australian team to find out exactly how their solutions could be of benefit to us.

“We needed a technology that would replace or complement our existing communications method of email, SMS and word of mouth, would be easy to operate, enable both local and global communications and could be used for both players and staff.”

Following a period of internal discussion and analysis of leading solutions, the Tripleplay platform was selected and deployed at City Football Group’s Melbourne headquarters, linking to Tripleplay solutions implemented in both Manchester and New York and enabling global communications.

The Tripleplay solution implemented at the Melbourne headquarters delivered digital signage and IPTV across the local area network (LAN), controlled centrally but with the ability to update via the organization’s wide area network (WAN) from the UK too.

Wilson sees that “digital signage is a very visual medium for communication so helps to ensure players and staff are aware of what is going on within the group.”

With integrated IPTV also available on screen it creates a much more eye-catching design and entertains and informs simultaneously.

Wilson continued “using Tripleplay’s technology has saved us a lot of time in getting our messages out and heard. With time saving there is always a monetary value; time is money as the saying goes, so the investment has been really worthwhile for us.

“The ability to control both locally and from afar has given us a very agile and versatile communications platform.”

Aside from the planned benefits of the Tripleplay digital signage and IPTV solution, there has been an unexpected use and benefit as the club staff has utilized the solution to motivate and inspire players before games.

Wilson concludes “in the run up to games we’re playing loops of great moments from the season gone and highlights of games against our upcoming opposition, helping us create a buzz around the club and helping to inspire the team to success.

“It has been an added benefit and really popular around the club and within the City Football Group. We are really pleased with our decision to work with Tripleplay, their solutions are constantly evolving and they view their work with City Football Group and its teams as a partnership and relationship.”

Since the City Football Group, which also owns English Premier League club Manchester City FC and Major League Soccer club New York City FC, acquired Melbourne City in 2014, it has made reliable local and global communication a key focus, with the Melbourne office requiring regular dialog with City Football Group’s offices in London and Manchester in the UK and New York in the US.