Following its involvement in landmark developments like the City Football Group’s training and administration facility at La Trobe University in Melbourne, infrastructure specialist Proleisure has undertaken significant expansion, establishing a permanent base in Australia while embarking on a major recruitment drive.

“AFL’s Essendon and Collingwood, and Melbourne City’s Football Academy are examples of this (and) what we’re seeing now is much wider interest, and investment, in training infrastructure development across AFL, football, league and union.”

Proleisure’s Asia Pacific Director Ross Thompson says the increase in training facility development is being referred to as an “arms race”, explaining “I think a lot of clubs in this region are acknowledging the need for top-level resources, in order to be competitive. They’ve invested heavily in players, and they know they need to provide the best environment in which those players can operate.”

According to Thompson, the fact that there are now caps on staff salaries, as well as those of players, is a factor in clubs choosing to use infrastructure as a way of attracting the best people, and boosting the performance of existing team members.

While the exact specifications of that infrastructure varies from code to code, and venue to venue, common features include world-class pitches, custom gyms, state-of-the-art medical, rehabilitation and recovery resources, as well as the latest in performance monitoring and enhancement technology.

Thompson points out that a thriving club, with this advanced infrastructure, is not only attractive to players and workers, but also to those who might look to invest.

He adds “the development of elite-level facilities almost always prompts growth in the value of a club’s brand.

“That attracts investors, from potential sponsors right through to those who might seek to acquire it.”

Stemp explains “all clubs are trying desperately hard to win.

“The owners are all trying to make sure they’re commercially successful. What we’re starting to see is the ones that get where they want to go have found a way to invest in an infrastructure strategy.”

Proleisure works with elite clubs globally to vision and create that infrastructure, and counts the City Football Group’s Manchester and New York City Football Clubs, England’s Rugby Football Union, the Ultimate Fighting Championship (UFC) and FIFA as among its clients.

Its specialist team manages all aspects of development from audit and evaluation of a club’s needs, right through to the construction and operation of a facility. 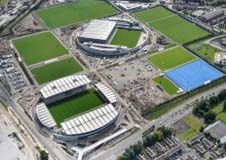 Stemp comments “we work to understand every granular facet of an organisation, and what every person there does.

“We develop that information using our functional modelling, create a physical manifestation of the best thinking, and, focusing on efficiency, a physical space that works for everyone who uses it.“

Proleisure’s contributed its expertise to the development of the City Football Group’s Melbourne City Football Academy at La Trobe University which opened earlier this year.

This facility shares elements of its design and functionality with the Manchester City Football Academy, widely regarded as one of the most exceptional sporting facilities in the world.

Speaking at the time of its launch, Melbourne City Vice Chairman Simon Pearce stated “Melbourne City Football Club players and coaching staff now have access to facilities designed according to the same research-based philosophy that underpins the CFA in Manchester, and is built by the same team.”

Like many of the elite training facilities Proleisure has worked on, the Melbourne CFA brings players, coaches, commercial and administrative staff together under one roof. It also boasts state-of-the-art youth resources which ensure sustainable pathways for the club, and features spaces specifically designed to optimise experiences for fans and the wider community.