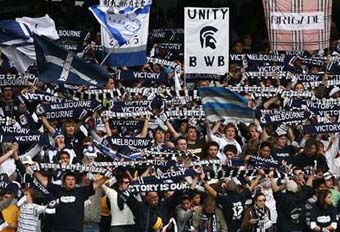 Football Federation Australia (FFA) has announced a major management change to set up the game for the 20-year vision contained in the Whole of Football Plan.

The establishment of a new Digital and Fan Engagement Department aims to transform FFA’s ability to connect with the 1.96 million participants in Australian football.

The department will be positioned at the heart of the FFA business with a mandate to collaborate with stakeholders in providing a world-class experience to fans, players, coaches, club administrators, referees, volunteers and general football consumers.

The scope of the remit includes technology systems, data, content and consumer sales.

Explaining that this is the most significant decision taken since the Whole of Football Plan was published in May, FFA Chief Executive David Gallop stated “the game has a clear objective to become the largest and most popular sport in Australia and now we setting up the mechanisms the achieve it.

“This decision is culmination of extensive work and consultation on strategy and scoping of our digital landscape over the past 18 months. I’m delighted to bring all that effort to life in a new Digital and Fan Engagement department.”

Gallop has announced that Robert Squillacioti, currently General Manager Marketing and Fan Engagement, has been appointed as Head of the new department. Squillacioti will report directly to the Chief Executive.

Gallop added “Rob is one of several young, talented and driven executives at FFA.

“Being able to promote from within is a sign of FFA’s commitment to find the best people and nurture them for bigger things.

“I’ve been very impressed by Rob’s commitment to be a ‘champion of the fan’ in his role over the past three years. He has an incredible depth of knowledge and insight to the digital world and he’s ideal for this role.”

30 year old Squillacioti joined FFA in 2011 as Digital Content Manager after working in major consumer and digital projects at ANZ Stadium and The Star. He was elevated to General Manager Marketing and Fan Engagement in 2012.

This year he undertook a study tour of the sports industry in the USA with a focus on digital and fan engagement, visiting 10 major franchises across MLS, MLB, NFL and NHL.

Welcoming his appointment, Squillacioti stated “I’m thrilled to get this opportunity to lead FFA’s effort in digital and fan engagement.

“I am a ‘data nut’ and live by the mantra that businesses should not create digital strategies, but strategies for a digital world. In doing that, the experience of participants and fans is paramount.

“I thank David for the confidence he’s shown in me and for having the vision to see the importance of this step towards fulfilling the Whole of Football Plan objectives.”

As part of the new department, Vanessa Bolzan has been appointed to the role of Fan Engagement Manager. In a related appointment, Jess Laycock becomes Senior Marketing Manager.