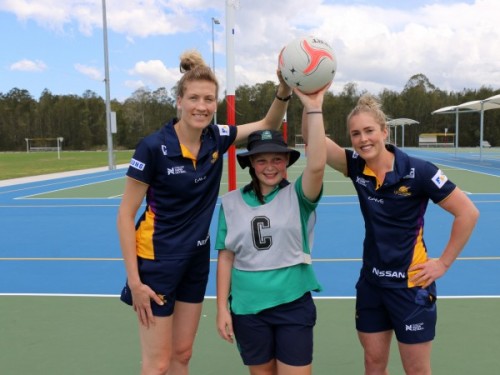 10 recently upgraded netball courts at the Maroochydore Multi Sports Complex have been put to the test this week by primary school players as part of the Sunshine Coast Independent Schools Sports Association Primary Gala Day.

The upgrade, funded by council’s $253 million Capital Works Program and the Queensland Government under the Get Playing Plus Program, also included new shade structures and water fountains.

Sunshine Coast Councillor Ted Hungerford said the upgrades would benefit players of all ages, commenting “these improvements are the latest of many undertaken as part of the Maroochydore Multi-Sports Complex Master Plan 2013 – 2028.

“This is a regional facility that caters for club and school netball teams as well as netball carnivals and events, so this upgrade will make a difference to a lot of players.

“Netball is one of the most popular sports among Australian children ... so it’s vital we provide high quality facilities for them to make the most of the sport.

“The arrival of the Sunshine Coast’s first national sporting team, the Lightning, this year competing in the new Suncorp Super Netball competition has already sparked an increased interest in the game locally.

“There is no doubt that this will translate into even higher participation rates so it is important that we plan for this by providing quality infrastructure.”

The remaining six netball courts at the complex will be upgraded later this year.

Previous improvements made as part of the Maroochydore Multi-Sports Complex Master Plan 2013 – 2028 include:

• An extension of the football clubhouse to improve change room capacity, canteen area and general storage space
• An additional seven-bay storage shed and a new waste management compound
• New coach and player boxes on the AFL field, plus refurbished existing coach boxes and an interchange bench to provide much needed protection from the elements for players and officials.

Images: Karla Mostert and Laura Scherian with Tayla Fraser, aged 11, who played in the Primary Gala Day (top) and the new courts (below).