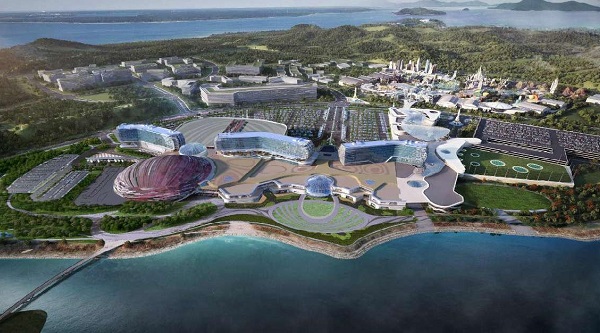 Projected to open in 2021, the integrated entertainment resort destination, features include a three-tower luxury hotel, premier shopping, gaming and entertainment amenities including a 15,000-seat indoor arena and outdoor performance space.

Introducing the partnership, MGE Chief Executive, Mario Kontomerkos stated “Mohegan Gaming & Entertainment and Live Nation have been long-time partners in creating one of the most successful arena venues in the world for its size, the Mohegan Sun Arena in Uncasville, Connecticut.

“Now, we are partnering again to do the same, only this time it will be at the Inspire Super Arena at the Incheon International Airport, right in the heart of the burgeoning Northern Asia entertainment market. The move further solidifies MGE’s position as the premier global gaming and entertainment resort developer and operator.”

MGE’s Mohegan Sun Arena in Uncasville, Connecticut, USA has been partnered with Live Nation since 2001 and recently came in at No. 21 on Pollstar’s 3Q Worldwide Ticket Sales Top 200 Arenas chart.

Alan Ridgeway, Live Nation’s President of International and Emerging Markets, added “we have been thrilled by the success of what Live Nation and Mohegan Gaming & Entertainment have built together through the Mohegan Sun Arena in Uncasville and are excited to continue this partnership through Project Inspire.

“Touring throughout Northern Asia has grown significantly over the last few years, and the addition of the Inspire Super Arena can only continue to enhance that growth.”

MGE owns, develops, and/or manages integrated resorts in the USA and Asia, and own the WNBA’s Connecticut Sun and professional lacrosse team the New England Black Wolves.

The news of this partnership follows AEG’s announcement 30th September of its partnership with Thailand’s The Mall Group, the promotion giant and venue operator’s first major investment in South east Asia.

Michael Rapino spoke at length at the Goldman Sachs Communacopia Conference in 2017, stating that international expansion was a major part of Live Nation’s plans moving forward.

He went on to estimate that Live Nation might have 30% of the global market share of the live music industry, despite dominance in North America, and that a lot of LN’s attention will be devoted to promoting and selling tickets to more international shows in new markets.