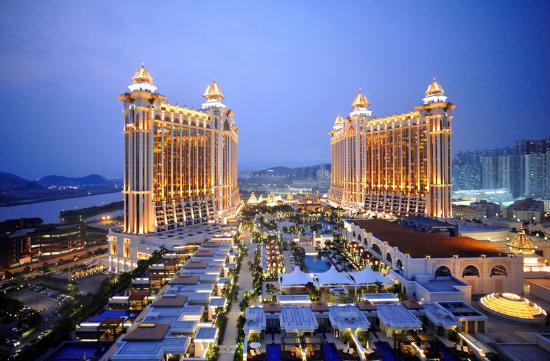 Casino operator Galaxy Entertainment Group plans to more than double its investment to HK$100 billion (US$12.90 billion) in its Macau integrated resort as part of a goal to reduce its focus on gambling.

Galaxy Chairman Lui Che Woo said recently explained that the company will invest at least HK$55 billion in the third and fourth phases of its Galaxy Macau Resort & Casino integrated resort to bring in more entertainment and cultural offerings.

The move comes as China is pushing for the southern territory to diversify its economy into areas such as culture, sports and retail.

Lui explained "the current message from the Central Government and the Macau Government is to develop other business alongside gaming. We have the largest land bank and it's to our advantage."

Galaxy, owned by Hong Kong construction tycoon Lui, has the largest plot of land on the main Cotai strip in Macau. Even after its next phase opens in May this year, it will still have an equivalent area of land to build on.

Macau, a special administrative region like Hong Kong, is the only place in China where casino gambling is legal. It has had rapid growth in previous years, making it the world's largest gambling destination.

However, gambling revenue in Macau fell last year for the first time since casinos were liberalised in 2001 as a Chinese Government campaign against conspicuous spending by public officials led to a decline in wealthy players.

Designed as an Asian-style palace, the 550,000 metre² property was the third casino to open on the developing Cotai strip, Macau's version of the Las Vegas strip and which authorities hope will transform Macau from a pure gambling destination into a renowned tourist and leisure destination.

Galaxy's new 2,200 room property, which incorporates international hotel brands Banyan Tree and Japan's Okura, is hoping to creating a ‘super industry’ of gambling and tourism in the former Portuguese colony.

Lui explains "if you merge Phuket in Thailand together with Macau it would create a new dimensional kind of market.

"The example of Galaxy Macau is to bring this tropical mood to Macau."

As part of this concept, the roof area of the gambling hall is being developed to include a 52,000 metre² aquatic, recreation and wellness resort featuring gardens, six swimming pools, including a wave pool, lazy river and an artificial 2,000 metre² beach incorporating 350-tonnes white sand.

Known as the grand resort deck, Galaxy is hoping that the facility will reach create a niche market in the former Portuguese colony, emphasising the health and wellbeing of its visitors. 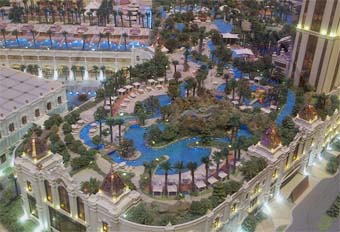 Myrtha Pools is constructing features within the wave pool, using its stainless steel pool construction technology on the 3,940 metre² wave pool and on the 1,340 metre long lazy river, which passes through the whole resort. The river includes several attractions, including a ‘volcano’, falls, geysers, hydro-massage area and a methacrylate bridge - a 13 metre long see-through construction that allows guests to see people walk along the path located under the bridge.

The soon-to-be-completed river is set to be a signature project demonstrating the application of Myrtha® Technology, with its highly flexible planning, significantly faster installation time than conventional designs, long-lasting performance over time and low maintenance requirements. 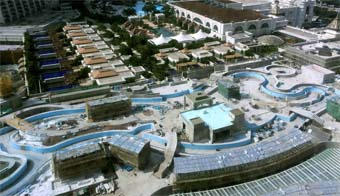 As a result, the aquatic features at the Galaxy Macau Resort & Casino can truly be considered as a global landmark in aquatic design.

For more information on the Galaxy Macau Resort & Casino go to www.galaxymacau.com/en/

Images: Designed as an Asian-style palace, the 550,000 metre² Galaxy Macau Resort & Casino is the third casino to open on the developing Cotai strip (top); the design of the water features on the grand resort deck (middle) and the water features under construction (below).