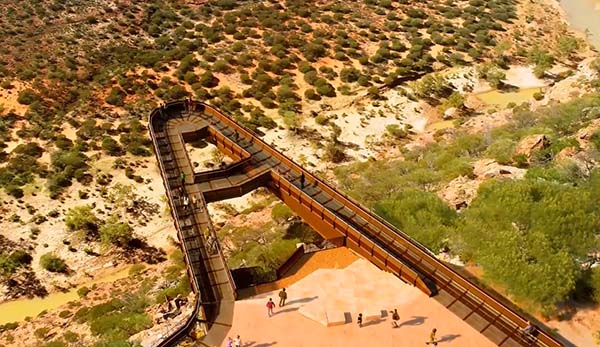 The two platforms project 25 and 17 metres beyond the cliff face and feature in a life-like animated tour of the new site that was recently released.

The virtual fly-through video takes viewers above the Murchison River and along the two 100-metre-high cantilevered skywalks.

The $5.3 million viewing platforms offer soaring views of the gorges and spectacular surrounds and were pre-fabricated in Henderson before being transported north in 13 segments on nine trucks.

The universally accessible site will also include an environmentally friendly kiosk that will operate on low to nil emissions with an off-the-grid energy/power system.

There will also be toilets, shade shelters, and improved road and tourism infrastructure.

Overall, this $24 million project, which includes $10.1 million of road and car park improvements, has created more than 150 local jobs during the construction phase and 10 jobs for local Aboriginal people.

Two Aboriginal rangers have also been employed fulltime in the national park to help manage the increased tourism levels.

Western Australia Environment Minister Stephen Dawson advised "the Kalbarri Skywalk will further cement Kalbarri's reputation as an international destination and one of Australia's most popular destinations. It's really exciting to see the Skywalk come to life in the virtual fly-through.

"The skywalks have been designed to complement the existing landscape, and I'm pleased to say that with universal accessibility, they can be enjoyed by all who visit the park."

Western Australia Tourism Minister Paul Papalia added "there is an increasing demand for nature-based tourism and the State Government is rising to the challenge by investing in tourism infrastructure across Western Australia.

"Last financial year, more than 450,000 visits were recorded in Kalbarri National Park and we're certain that number will increase when the Skywalk opens in 2020.

"By delivering world-class facilities like the skywalks and associated infrastructure, including 22 kilometres of sealed roads, Kalbarri National Park will drive tourism growth in the Mid-West region."