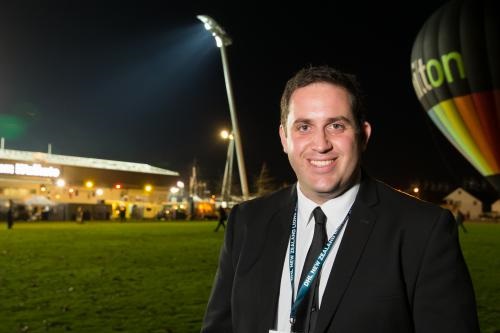 Ben Slatter, Venue Manager at Hamilton’s FMG Stadium Waikato and Seddon Park has been presented with a piece of history from the venue as a permanent memento.

The medallion is held within a wooden case made from original timber from the venue - before its redevelopment in the early 2000s - and it marks Slatter’s work in managing the venue over the last few years.

Bos, who presented the medallion on the first of the day of the Sevens tournament, stated “it’s important to be proud of other people.

“Ben’s done a fantastic job: his loyalty, hard work and commitment to his role are really exemplary and I wanted to ensure he was recognised for that. As stadium patron I am very proud of the great work he’s done managing events and operations here - and I am sure others are too.”

Slatter is into his seventh year working for Hamilton City Council’s events and venues division, H3, and has been in his current role for four years - a position which also includes responsibility for Seddon Park.

He commented “it’s very touching to receive the medallion from Peter.

“He’s poured a lot of time and energy into the stadium and to have my work recognised by him personally is humbling.

“I get a real kick out of managing FMG Stadium Waikato and I’ve been fortunate to be involved in some great matches and events here, including world cups, All Blacks Tests, and now the Sevens.

“I’ve no plans to move on any time soon, but when my time at FMG Stadium Waikato does reach its conclusion the medallion will be an important memento of some great days on the job and the support of fantastic colleagues and friends.”

In November, Slatter was recognised as Simpson Grierson Operations Manager of the Year at the Entertainment Venues Association of New Zealand (EVANZ) Awards. 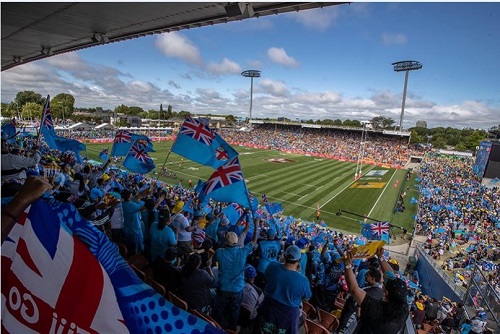 Hamilton’s second year of hosting the New Zealand Sevens on the world rugby stage has been a success.

Held on 26th and 27th January, the competition culminating with Fiji claiming the men’s trophy late this evening - the team’s second title in Hamilton.

Attendance on both days surpassed the 2018 event with a sell-out crowd of more than 25,000 packing in for finals day to watch fast-paced sevens rugby from the world’s top teams.

More than 50 staff and volunteers from Hamilton City Council were involved in running the event.

Hamilton Mayor Andrew King stated “I’m immensely proud of the city, the venue and the people who have delivered the tournament over the weekend. The energy, passion and behaviour of the crowds has been brilliant - and the Sevens in Hamilton has really lived up to expectations again.”

“The fans once again played a massive role in making the 2019 HSBC New Zealand Sevens a colourful and memorable weekend and the rugby was world-class.

“It was really special to see our Black Ferns Sevens play on home soil and we look forward to them being part of a fully integrated tournament in the future.”