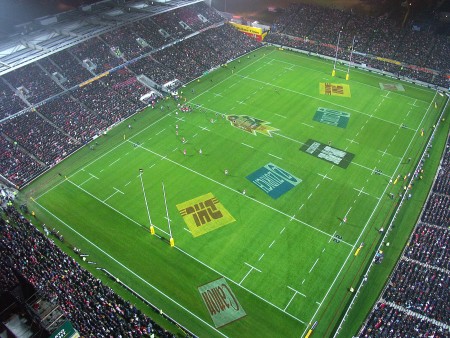 Hamilton City Council and the Chiefs Super Rugby franchise have agreed a new deal for the use of Waikato Stadium.

The deal will see the Chiefs play a minimum of five Super Rugby matches at the venue, with Council to receive a competitive percentage of the combined gross ticket sales from each game, in line with current sporting event market practice. Should the Chiefs host the competition's final, it will be held at Waikato Stadium.

Lance Vervoort, Hamilton Council's acting General Manager for Economic Development and Events, said the new agreement provided an improved legal framework for the deal between the two parties. Council's cut of the ticket sales will be paid directly from the ticketing provider, ensuring ratepayers were not exposed. However, Council acknowledges the Chiefs have been reliable tenants at the stadium and looks forward to a continued positive relationship.

Vervoort stated "with the signings of marquee players Sonny Bill Williams - rugby's hottest property - and Aaron Cruden for 2012, the Chiefs will enter an exciting new era and we are hoping to see increased crowds for matches."

The Council and the Chiefs have agreed not to disclose exact figures as the Chiefs continue negotiations with other venues in the franchise's region for their other Super Rugby season fixtures.

The Chiefs would pay Council all game day expenses, and Council will also receive revenue from food and beverage commissions and signage. The Chiefs will not train at the stadium, and the franchise's offices will move from the stadium precinct. The new deal also allows flexibility for the use of the stadium for other events.

Chiefs Chief Executive Gary Dawson stated that "we're thrilled with this deal. This is a brand new direct agreement between Council and the Chiefs, and we believe it's a very positive step. It emphasises how important Waikato Stadium is the franchise, and gives security and confidence to both parties."

The Chiefs deal follows an agreement with the Waikato Rugby Union, struck (WRU) earlier this year, which alters the payment structure between the WRU and Council. Vervoort said the two deals separated the arrangements between what are now two separate Rugby entities.

Vervoort said the deal also ensures Council receives a minimum of $465,000 per annum in Test match years, a sum which could potentially increase dependent on ticket sales for all matches.

New Zealand Rugby Union and Waikato Rugby Unions have confirmed Waikato Stadium will host Test matches in 2012 and 2013 - against Ireland and Argentina - meaning Council will benefit significantly in the immediate future.

WRU Chief Executive Graham Bowen said "this deal cements a strong partnership between WRU and HCC in hosting future test matches in the city, and given how well the stadium has performed in recent years - particularly three Rugby World Cup matches - we believe we're in a strong position to get more international fixtures.

"The new deal with Council puts the WRU in a more financially sustainable position, and gives both parties firm assurance of overcoming past fiscal challenges."

Vervoort added that the WRU and Council had prioritised securing Test matches in the future.