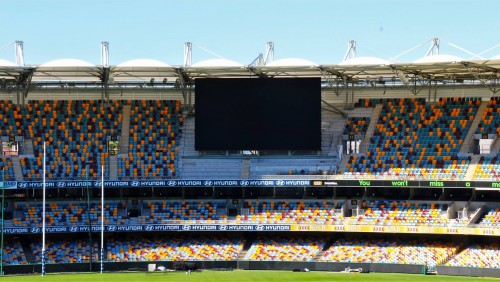 Completed in advance of the AFL Premiership clash between the Brisbane Lions and the Fremantle Dockers, the screen, the first of two to be installed, is part of a $7 million project to deliver four new high definition LED screens to Suncorp Stadium and The Gabba.

The  147 metre², HD LED video display screen located on the Eastern side of the stadium, aims to deliver excellent image and video quality, and ensure fans attending the venue can catch every minute of the on-field action, wherever they sit.

Commenting on the project, Queensland Minister for Sport Mick de Brenni “new video screens were recently installed at Suncorp Stadium ahead of the NRL Double Header and State of Origin, and we’ve had fantastic feedback about them from fans, the Broncos and the NRL.

“Investing in this infrastructure will allow sporting codes and event promoters more opportunities to interact with fans and also ensure Queensland continues to attract the biggest and best sporting and entertainment events.”

The Gabba Manager Blair Conaghan said the screen would represent the biggest visual transformation of the ground since the final stage of the redevelopment in 2006.

Conaghan added “the Gabba has long been a Queensland icon and a fan favourite, and this upgrade will ensure the venue keeps pace with the rapid technology that we see in stadia around the world.

“AFL fans will be the first to catch a glimpse of this new screen, and a screen on the Western side will be installed after the conclusion of the AFL season to minimise disruption to the schedule, with the second screen to be in place before the Ashes.”

Watpac Limited Managing Director Martin Monro said the company was delighted to be delivering this project in its home state of Queensland, concluding “Watpac has been involved in building a number of Queensland’s iconic venues, including The Gabba and it is wonderful that we are playing a role in the evolution of this much-loved stadium.

“We hope the new screens will provide fans with an even better experience.”