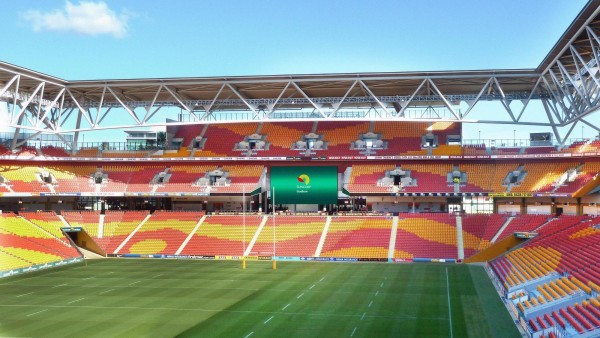 Brisbane's major sporting venues are to undergo a digital overhaul to boost their match day entertainment offerings, with the installation of massive new screens at The Gabba and Suncorp Stadium.

With Brisbane’s stadiums having been criticised for not keeping pace with technology, the $7 million investement will deliver two new LED screens at each evenue, each approximately 140 metre² in size, more than double the size of the existing screens at Suncorp Stadium.

The new screens will allow sporting codes and event promoters to display a wider range of information from match day related information to increased sponsorship opportunities.

The installation will occur in 2017 during gaps between the fixture dats of the major hirers, with  Stadiums Queensland coordinating the work.

Queensland Treasurer and Minister for Sport Curtis Pitt said the new screesn will provide an improved match day experience for fans, as well as ensuring Queensland venues remain competitive with other states.

Treasurer Pitt stated “major hirers have been asking for this infrastructure to increase their ability to engage with fans on match days, and also ensure nobody misses out on any of the on field action.

“Following recent upgrades to IT infrastructure by Stadiums Queensland, I’m pleased to say we are now in a position to be able to install bigger, brighter and better screens across the two venues.

Treasurer Pitt suggested that with Suncorp Stadium hosting the final of the 2017 Rugby League World Cup the new screens would pu the venues “in fighting form to snare an NRL Grand Final from Sydney.

He added “this would not just be a historic achievement for our state, it would deliver enormous financial benefits.”

Treasurer Pitt also suggested that “the atmosphere at The Gabba and Suncorp Stadium is far beyond that in other states, however, the replay screens have been outdated by the rapid advancement of modern video technology.

More than 1.5 million patrons have attended events at the two venues over the last year.