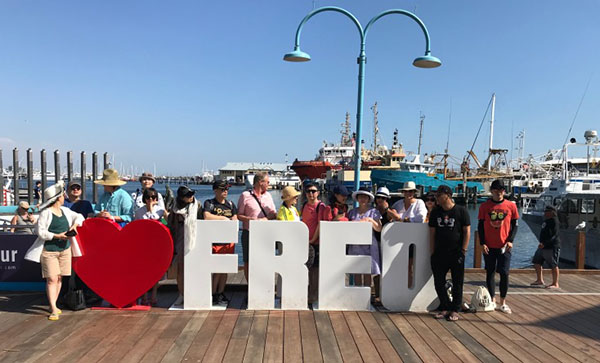 Fremantle in Western Australia is set to become a film-friendly city after the Fremantle Council recently unanimously voted to develop a ‘Film Friendly Freo’ policy.

The film policy, proposed by Councillor Hannah Fitzhardinge, would make it quicker and easier for film-makers to gain approvals and support from the City to film in Fremantle.

“Fremantle’s iconic locations, from our beaches to our working port and heritage West End, provide an abundance of attractive settings for films of all types,” Councillor Fitzhardinge said.

“Encouraging film-makers to make films here has a flow-on local economic benefit, and also showcases our city to audiences far and wide.

“It would be a positive step forward to support the professional film and television industry to use the city for this purpose.”

The council’s decision coincided with a recent visit to Fremantle of a delegation of some of China’s leading film production and financing companies. The delegation was in Western Australia (WA) to review film production possibilities across WA made possible through a joint venture agreement recently completed with local firm Legend Media Group.

The visitors were shown Leighton and Port Beaches, Fremantle Port and the WA Maritime Museum before boarding a ferry to Rottnest Island.The City of Fremantle also took the delegation on a tour of the city on the Fremantle Tram, taking in locations like South Fremantle, Fremantle Prison, Cappuccino Strip, Esplanade Park, West End and the Round House.

Legend Media Group is a Perth-based film production company focused on telling Australian/Chinese stories that respond to both the Australian and Asian markets.
Legend’s Executive Creative Director Camille Chen said the visit was a wonderful opportunity to introduce some of China’s most influential film-makers to Fremantle’s unique attractions.

“The delegation was impressed with the city’s possibilities for providing a world-class entertainment environment and vibrant community profile,” Chen said.

“The potential flow-on effect for attracting Chinese tourists into Fremantle is immense, and we look forward to being able to use Fremantle as a key back drop for upcoming film projects.”

Two Australian film productions have been shot in Fremantle in recent weeks. I Met a Girl, the story of an impulsive young musician struggling with schizophrenia who falls for a mysterious woman, was shot at various locations in the West End and is due for release next year. Below, a black comedy-drama starring Anthony LaPaglia and Ryan Corr, was shot at Fremantle Prison and is due out later this year.