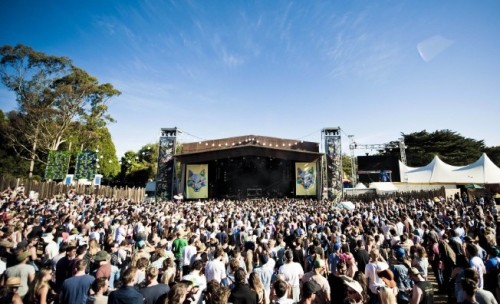 The Falls Music and Arts Festival has announced that it is expanding to Western Australia in 2017, with a completely new event called Falls Downtown set to bring Australian and international artists to the streets and forgotten buildings of Fremantle over two days in January.

Organisers expect that the first-ever Falls Downtown will seek to break the traditional Falls Festival format by “awakening spaces which have been lost in time”.

Falls Downtown’s open air Main Stage will be situated in the Fremantle town square, with plenty of spaces to chill in during the day, including bars and seating in the shade of nearby trees and palms.

The Festival will also bring the abandoned local Myer building back to life, with danceterias, art installations, performances areas and markets spread across multiple levels of the building, which will also feature rooftop ‘glamping’.

Over in the Town Hall Atrium, Falls Downtown will put on a ballroom blitz, complete with luxurious 19th century decor and a velvet-draped stage.

Falls Downtown 2017 is set to take place on Saturday, 7th January and Sunday, 8th January, with more details about the event (and its highly-anticipated lineup) still to be announced.

Falls Downtown will be held in Fremantle on Saturday 7th and Sunday 8th January 2017.