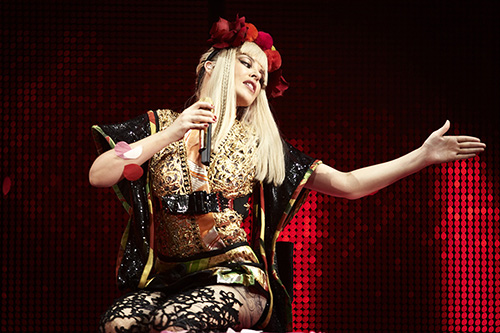 While the new museum for Western Australia is being developed in Perth, WA Maritime Museum in Fremantle is giving Kylie Minogue fans an opportunity to go behind the scenes of her international career with a look at 25 years of incredible concert performances.

Drawn from Minogue’s spectacular stage wardrobe, which is part of the Arts Centre Melbourne's Performing Arts Collection, the Kylie on Stage exhibition features a selection of designs, working drawings and video footage that explores the creative process behind each costume, and provides rare glimpses into the world backstage.

Minogue stated "touring and live performance has been such a big part of my life and my development as an artist, so I'm thrilled to be able to share this with my fans in Perth. I'm excited that everyone can get up close and personal with my costumes and get a glimpse behind the curtain to see some of the design process."

Curated by Arts Centre Melbourne dance and opera curator Margot Anderson, Kylie on Stage includes costumes dating back to 1989, as well as those from more recent tours such as Kylie Aphrodite Les Folies in 2011.

Anderson said Minogue’s showgirl costume by John Galliano in particular were phenomenal, as if it had almost been engineered, advising "it’s hard to find a favourite, I think I love them all.

“The aim of an exhibition like this is to help people revisit some lovely moments they might have shared with Kylie at these concerts.”

Western Australian Culture and the Arts Minister David Templeman added "Kylie Minogue is Australia's very own sweetheart but she's also a powerhouse of talent and professionalism who has built an extraordinary career, delighting fans on the world stage for more than 25 years.

"This exhibition is a must-see, not just for fans but for anyone interested in costume design, music, showmanship or the creative industries. Visitors will get up close and personal to dozens of spectacular costumes and will discover the enormous amount of talent and work involved in developing world-class concerts.

"More than 250,000 people visited this exhibition when it was staged in Melbourne and I'm delighted that it will be on display at the WA Maritime Museum in Fremantle.”

In addition to the exhibition, fans will also have the chance to celebrate all things Kylie with a series of pop-up events.

Kylie on Stage is a touring exhibition proudly presented by Arts Centre Melbourne and the Australian Music Vault, and is supported by Creative Victoria. The principal partner for the WA show is DFO Perth.

Kylie on Stage opened in Melbourne in 2016 and toured regional Victoria before makings its way to WA Maritime Museum where it will run from 16th February to 9th June.